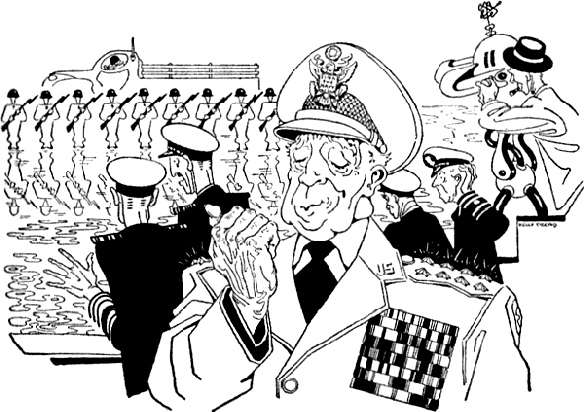 The Army had a new theme song: "Anything you can do, we can do better!" And they meant anything, including up-to-date hornpipes!

General Wingrove looked at the rows of faces without seeing them. His vision went beyond the Congress of the United States, past the balmy June day to another day that was coming. A day when the Army would have its destined place of authority.

He drew a deep breath and delivered what was perhaps the shortest speech ever heard in the hallowed halls of Congress:

"The General Staff of the U.S. Army requests Congress to abolish the archaic branch of the armed forces known as the U.S. Navy."

The aging Senator from Georgia checked his hearing aid to see if it was in operating order, while the press box emptied itself in one concerted rush and a clatter of running feet that died off in the direction of the telephone room. A buzz of excited comment ran through the giant chamber. One by one the heads turned to face the Naval section where rows of blue figures stirred and buzzed like smoked-out bees. The knot of men around a paunchy figure heavy with gold braid broke up and Admiral Fitzjames climbed slowly to his feet.

Lesser men have quailed before that piercing stare, but General Wingrove was never the lesser man. The admiral tossed his head with disgust, every line of his body denoting outraged dignity. He turned to his audience, a small pulse beating in his forehead.

"I cannot comprehend the general's attitude, nor can I understand why he has attacked the Navy in this unwarranted fashion. The Navy has existed and will always exist as the first barrier of American defense. I ask you, gentlemen, to ignore this request as you would ignore the statements of any person ... er, slightly demented. I should like to offer a recommendation that the general's sanity be investigated, and an inquiry be made as to the mental health of anyone else connected with this preposterous proposal!"

The general smiled calmly. "I understand, Admiral, and really don't blame you for being slightly annoyed. But, please let us not bring this issue of national importance down to a shallow personal level. The Army has facts to back up this request—facts that shall be demonstrated tomorrow morning."

Turning his back on the raging admiral, General Wingrove included all the assembled solons in one sweeping gesture.

"Reserve your judgment until that time, gentlemen, make no hasty judgments until you have seen the force of argument with which we back up our request. It is the end of an era. In the morning the Navy joins its fellow fossils, the dodo and the brontosaurus."

The admiral's blood pressure mounted to a new record and the gentle thud of his unconscious body striking the floor was the only sound to break the shocked silence of the giant hall.

The early morning sun warmed the white marble of the Jefferson Memorial and glinted from the soldiers' helmets and the roofs of the packed cars that crowded forward in a slow-moving stream. All the gentlemen of Congress were there, the passage of their cars cleared by the screaming sirens of motorcycle policemen. Around and under the wheels of the official cars pressed a solid wave of government workers and common citizens of the capital city. The trucks of the radio and television services pressed close, microphones and cameras extended.

The stage was set for a great day. Neat rows of olive drab vehicles curved along the water's edge. Jeeps and half-tracks shouldered close by weapons carriers and six-bys, all of them shrinking to insignificance beside the looming Patton tanks. A speakers' platform was set up in the center of the line, near the audience.

At precisely 10 a.m., General Wingrove stepped forward and scowled at the crowd until they settled into an uncomfortable silence. His speech was short and consisted of nothing more than amplifications of his opening statement that actions speak louder than words. He pointed to the first truck in line, a 2½-ton filled with an infantry squad sitting stiffly at attention.

The driver caught the signal and kicked the engine into life; with a grind of gears it moved forward toward the river's edge. There was an indrawn gasp from the crowd as the front wheels ground over the marble parapet—then the truck was plunging down toward the muddy waters of the Potomac.

The wheels touched the water and the surface seemed to sink while taking on a strange glassy character. The truck roared into high gear and rode forward on the surface of the water surrounded by a saucer-shaped depression. It parked two hundred yards off shore and the soldiers, goaded by the sergeant's bark, leapt out and lined up with a showy present arms.

The general returned the salute and waved to the remaining vehicles. They moved forward in a series of maneuvers that indicated a great number of rehearsal hours on some hidden pond. The tanks rumbled slowly over the water while the jeeps cut back and forth through their lines in intricate patterns. The trucks backed and turned like puffing ballerinas.

The audience was rooted in a hushed silence, their eyeballs bulging. They continued to watch the amazing display as General Wingrove spoke again:

"You see before you a typical example of Army ingenuity, developed in Army laboratories. These motor units are supported on the surface of the water by an intensifying of the surface tension in their immediate area. Their weight is evenly distributed over the surface, causing the shallow depressions you see around them.

"This remarkable feat has been accomplished by the use of the Dornifier. A remarkable invention that is named after that brilliant scientist, Colonel Robert A. Dorn, Commander of the Brooke Point Experimental Laboratory. It was there that one of the civilian employees discovered the Dorn effect—under the Colonel's constant guidance, of course.

"Utilizing this invention the Army now becomes master of the sea as well as the land. Army convoys of trucks and tanks can blanket the world. The surface of the water is our highway, our motor park, our battleground—the airfield and runway for our planes."

Mechanics were pushing a Shooting Star onto the water. They stepped clear as flame gushed from the tail pipe; with the familiar whooshing rumble it sped down the Potomac and hurled itself into the air.

"When this cheap and simple method of crossing oceans is adopted, it will of course mean the end of that fantastic medieval anachronism, the Navy. No need for billion-dollar aircraft carriers, battleships, drydocks and all the other cumbersome junk that keeps those boats and things afloat. Give the taxpayer back his hard-earned dollar!"

Teeth grated in the Naval section as carriers and battleships were called "boats" and the rest of America's sea might lumped under the casual heading of "things." Lips were curled at the transparent appeal to the taxpayer's pocketbook. But with leaden hearts they knew that all this justified wrath and contempt would avail them nothing. This was Army Day with a vengeance, and the doom of the Navy seemed inescapable.

The Army had made elaborate plans for what they called "Operation Sinker." Even as the general spoke the publicity mills ground into high gear. From coast to coast the citizens absorbed the news with their morning nourishment.

"... Agnes, you hear what the radio said! The Army's gonna give a trip around the world in a B-36 as first prize in this limerick contest. All you have to do is fill in the last line, and mail one copy to the Pentagon and the other to the Navy ..."

The Naval mail room had standing orders to burn all the limericks when they came in, but some of the newer men seemed to think the entire thing was a big joke. Commander Bullman found one in the mess hall:

The Army will always be there, On the land, on the sea, in the air. So why should the Navy Take all of the gravy ...

to which a seagoing scribe had added:

The newspapers were filled daily with photographs of mighty B-36's landing on Lake Erie, and grinning soldiers making mock beachhead attacks on Coney Island. Each man wore a buzzing black box at his waist and walked on the bosom of the now quiet Atlantic like a biblical prophet.

Radio and television also carried the thousands of news releases that poured in an unending flow from the Pentagon Building. Cards, letters, telegrams and packages descended on Washington in an overwhelming torrent. The Navy Department was the unhappy recipient of deprecatory letters and a vast quantity of little cardboard battleships.

The people spoke and their representatives listened closely. This was an election year. There didn't seem to be much doubt as to the decision, particularly when the reduction in the budget was considered.

It took Congress only two months to make up its collective mind. The people were all pro-Army. The novelty of the idea had fired their imaginations.

They were about to take the final vote in the lower house. If the amendment passed it would go to the states for ratification, and their votes were certain to follow that of Congress. The Navy had fought a last-ditch battle to no avail. The balloting was going to be pretty much of a sure thing—the wet water Navy would soon become ancient history.

For some reason the admirals didn't look as unhappy as they should.

The Naval Department had requested one last opportunity to address the Congress. Congress had patronizingly granted permission, for even the doomed man is allowed one last speech. Admiral Fitzjames, who had recovered from his choleric attack, was the appointed speaker.

"Gentlemen of the Congress of the United States. We in the Navy have a fighting tradition. We 'damn the torpedoes' and sail straight ahead into the enemy's fire if that is necessary. We have been stabbed in the back—we have suffered a second Pearl Harbor sneak attack! The Army relinquished its rights to fair treatment with this attack. Therefore we are counter-attacking!" Worn out by his attacking and mixed metaphors, the Admiral mopped his brow.

"Our laboratories have been working night and day on the perfection of a device we hoped we would never be forced to use. It is now in operation, having passed the final trials a few days ago.

"The significance of this device cannot be underestimated. We are so positive of its importance that—we are demanding that the Army be abolished!"

He waved his hand toward the window and bellowed one word.

Everyone looked. They blinked and looked again. They rubbed their eyes and kept looking.

Sailing majestically up the middle of Constitution Avenue was the battleship Missouri.

The Admiral's voice rang through the room like a trumpet of victory.

"The Mark-1 Debinder, as you see, temporarily lessens the binding energies that hold molecules of solid matter together. Solids become liquids, and a ship equipped with this device can sail anywhere in the world—on sea or land. Take your vote, gentlemen; the world awaits your decision." 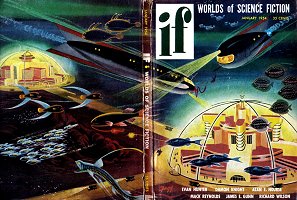