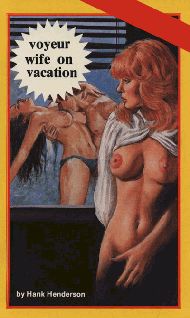 Mary Arnold awoke and instinctively reached across the king-sized bed for her husband's crotch. Instead, her hand closed on the rumpled sheet and she realized Don wasn't in bed with her anymore.

"Shit!" she mumbled to herself, sitting up and looking around the spacious hotel room.

Though the thin drapes she could see her husband's silhouette in one of the chairs on the balcony, hunched over the table.

"Don?" she called towards the balcony. "Don, what are you doing?"

"Morning, babe," Don called cheerfully from outside. "I'm just working on some papers for the office."

What the hell is the matter with us, Mary thought. We're on the second day of our vacation and he's doing his fucking office work.

Flipping onto her back again, she ran her hands down her naked body and tried to remember the last time Don had really been excited about having sex.

During the first year of their marriage, Don and Mary had had a wonderful sex life, fucking at every opportunity. Then he was promoted and became preoccupied with fighting his way up the corporate ladder of success. Since then Mary couldn't remember the last time her husband had fucked her long enough to give her an orgasm.