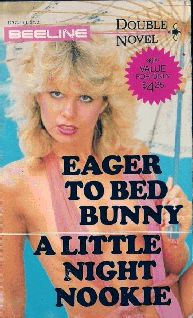 The book that had arrived in the brown paper wrapping was a whole lot better than any books I'd ever seen before. After looking at a few of the pictures, I started feeling wonderfully warm. I thought of that night with my brother Harold-instinctively I slid my hand down and began rubbing my crotch, turning the pages absent mindedly.

There was a photo of a girl with perfectly enormous breasts, all spread out in a weird position, with one rather good-looking young man pushing his dong into her cunt, and another one in a sort of straddle, so she could suck on his thing, which was the size of a salami, I swear. From her expression, and theirs, everybody was enjoying themselves. I wasn't though; I was plain envious-mostly of her development.

People have said I'm a bit overdeveloped for my age, but in that town, that didn't mean much. I didn't think so anyway.

Then I jumped up and opened the bathroom door so I could look in the mirror, and just stood there-dissatisfied. I have this good thick crop of hair, which I was wearing in a couple of braids just now, and I was wearing my house pajamas. I opened up the jacket front, and stared hard.

Mine were just nowhere, compared to those in the picture; about the size of apples, and the nipples weren't any bigger than pale pink dimes. They'd never get to be that size, I thought, no matter how enthusiastically Bo squeezed them-the way he had been doing lately down at the Passion Pit That was about Bo's limit, though if the movie were long enough he got as far as snapping at my pantie elastic once or twice.

Then there was the matter of hair; the young woman in the photo had an elegant triangle of thick fur, and me? Well! I had decided to check again, and undid my pajama bottoms, and dropped them. Fuzz as I thought. My brought Harold had more hair than that on his chest. Phooey.

I didn't put my p.j.'s hack on, because I was feeling warm and my skin tingled a bit- maybe the effect of the book. I flopped on the bed again, on my back, and took another long, envious look, turning the pages.

Now, this one was peculiar, I thought I hadn't known one could do that with such a large candle; I'd already tried it several times with a small candle, weeks and weeks before, and the first time wasn't any fun. Then, the second time, it felt nice, but nothing to write home about. Possibly, if I got a really big candle, I thought, studying the photo, I could have as much fun as this girl seemed to be having. And then, oh jeepers, I did something. I flipped at my clitoris with my finger-I went twang all over, and jumped about a foot straight up.

Well, for a couple of minutes I was just socked out I mean, I just lay there, damp all over and stars and colored lights rolling around in front of my eyes.