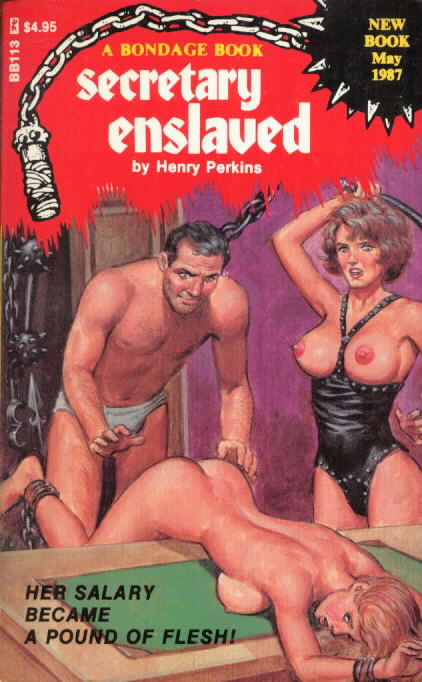 "I don't see that you have much choice, Miss Jones," Alex Hazen said, leaning back into the heavily-padded, monstrous swivel chair behind his desk.

The chair was made of rich black leather and it's back reached high up over her boss' head, reminding Sharon of a seat for some stem judge who might slap her into chains. The frightened young woman squirmed uncomfortably in a small chair at the front of the massive oak desk.

"Mr. Hazen," she said emphatically, straining to show her honesty with her voice, "I promise you, I didn't have anything to do with the money that's missing, no matter what you or anybody else might think!"

"Look," Mr. Hazen said, leaning forward and dropping his hands to the desk. "There's no sense in arguing about it, because my office manager confirms that it's true. Miss Lentz says she gave you the locked box with two-hundred dollars in it to put away and when she checked it later, the money was gone. She went through your desk while you were at break, and she found the missing key to the box in your top drawer."

"I didn't take that money," Sharon said tensely. "I'm a secretary, not a thief!"

Mr. Hazen's smile was caustic. "Then what about the two-hundred dollars we found stuck in the side pocket of your purse?"

"Somebody must have put it there while I was away from my desk!" Sharon cried, her mind in a complete swirl. Somehow, the whole afternoon had gone completely crazy, and everything was running out of control. The young woman, only a few years out of college, was growing more and more frightened and confused, and she didn't know what to do.

"That may be," Alex Hazen said as a crooked, sneering smile began to spread on his face. "But who's going to believe you? Do you think the police are going to take your word against ours when a businessman and his office manager tell them an employee has stolen our money?"

"They can't prove it because I didn't do it!" Sharon gasped.

"Ah, but they can!" Alex laughed triumphantly. "They'll have two respectable witnesses in me and Miss Lentz. I know you don't have any money, so you'll spend time in jail because you can't make bail, and the newspapers will tell everybody that you're nothing but a common thief. And even if you do manage to get out of jail after awhile, you'll have lost your job in the meantime. And there's nobody else who'll give another job to someone whose picture has been in the paper for stealing money from their employer."