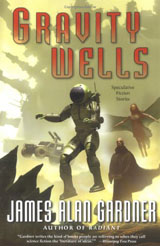 A Changeable Market in Slaves

A Changeable Market in Slaves

In the first day of the Month of the Quill, Slavemonger T’Prin finally admitted to himself he was bankrupt.

On the first day of the Month of the Quill, Slavemonger T’Prin finally admitted to herself she was bankrupt.

On the first day of the Festival of Galactic Harmony, Slavemonger T’Prin finally admitted to himself that the Avatar of Financial Abundance had not accepted his sacrifice.

On the first day of the Month of Joyous Struggle, Mother Machine awoke Slavemonger T’Prin with the cheery message, “Good morning, Citizen. In order to serve you better, your credit chip has been reduced to scrap plastic.”

On the first day of the Month of Desolation, Slavemonger T’Prin found no cup of blood by the coffin when he rose at sunset. The servants were dead, the chapel had been desecrated, and his possessions were gone, down to the last gold candlestick.

On the day after the orcs had been driven across the river for another winter, Slavemonger T’Prin discovered the contents of his storehouse had gone with them.

On the day after his revivification, Slavemonger T’Prin was informed by an embarrassed Integration Counselor that he had been reclassified as Financially Bereft, Category III (Organ Donor).

On the third day of Ragnarok, Slavemonger T’Prin finally admitted to himself that business would not improve.

On the day after Judgment, Lucifer informed Slavemonger T’Prin of a universal truth: you really can’t take it with you.

On the day after his reincarnation, Slavemonger T’Prin realized money is useless to those without opposable thumbs.

It was the first day of the Month of the Quill, a cold gray day with the wind blowing down from the hills like a banshee looking for fun, a day when the whores on Galadriel Boulevard were lowering their prices to get indoors faster and the thieves from Rudyard Alley stole gloves instead of gold; the sort of day when you long to be inside with someone who’ll say she loves you and maybe for a while you’ll even let yourself believe it because you want to think there’s such a thing in the world as warmth. Not the sort of day for sitting in your office and going over bank statements again and again, looking for anything that will tell you it’s all a mistake, that the money isn’t really gone like a woman who’s decided she needs time to find herself.

My name’s T’Prin. I sell slaves.

He awoke, remembering nothing. They told him his name was T’Prin, that he’d been a slavemonger, that he was now bankrupt. They thought he’d want to know what date it was and kept repeating it to him.

He’d never heard of the Month of the Quill — he knew the months by other names. But he’d call it Quill if they did. He’d play along with everything they said until he found out who he was this time and what the hell they’d done to his eyes.

“I say, fellows,” said Waddams after the sherry had been poured and the esteemed members of the Zambezi Club were settled into their accustomed postprandial positions, “did you hear about old T’Prinzy?”

Slavemonger T’Prin thought his worst problem was impending bankruptcy. Had he but known of the gibbering horror that was even now slithering from the well behind his isolated country home, had he caught the merest glimpse of its fetid claws dripping with noisome ichor or its thousands of facial tentacles blasphemously quivering with subliminal phallic intent, had he suspected for a single moment that before the night was through he would come face-to-face with the malevolent forces that wait in a place beyond darkness for the call that will summon them into our blindly unsuspecting world… perhaps the demands of his creditors would have occupied less of his mind.

As she drove along the yew-lined driveway toward the imposing Jacobean manor where she was to serve as governess to the T’Prin offspring, Harmony Bellancourt thought back to the unsettling interview where she met the broodingly handsome master of the house and said to herself, “I suppose it doesn’t matter that he’s a notorious slavemonger, as long as he pays me.”

Month of the Quill. Day one. Slaves restive. Hungry. Told them I was bankrupt. They thought I was lying.

Those muties will have to learn to believe me.

Slavemonger T’Prin came onstage wearing his trademark leather and leopard skins and immediately broke into his hit single “Month of the Quill.” The throbbing beat reached into the audience like a grimy fist, grabbed every blood-meat heart, and squeezed with a grip that tore away candy-assed restraints. It was a sonic drug, an injection of Primo Primeval that mixed with the other chemicals in the mob’s bloodstream to make a groin-grinding stew. Maybe the preachers were right when they said T’Prin was morally bankrupt; but bankrupt boys could still kick ass and the preachers shouldn’t forget it. When Slavemonger played, the audience demanded  to be slaves; and they were, by God, they were.

How many times had T’Prin walked down this narrow lane? How many times had he slunk away, from the law courts, avoiding the high street for fear of meeting someone he knew, someone who would ask about the proceedings against him? How many times had he come this way with his head reeling, wondering what tricks he could use when the bailiffs served him with another summons? Yet in all those times, he’d never before noticed the little shop tucked between the out-of-business bakery and the run-down travel agency: a little shop with its window caked in dirt and a door sign reading EXOTIC CURIOS.

In the land of Ithlandril, at the confluence of the rivers Udalanar and Surandimir, not far from the Plains of Occlanoue where Garth One-Finger fought the Battle of Kennings Mill against Malevon Darkstrider and the forces of Hnurn, a day’s march from the Jhallawel Forest so famous for Ba’ullahnut berries and the nomadic Quinquopel horses, there was a village named Fe’Huulin’s Rest, not named after Fe’Huulin the Gray, as you might expect, but after his son by the beauteous Ellandewollinir, Fe’Huulin d’Ellandewollinir, sometimes called Fe’Huulin Vallamarn or more simply Fe’Huulin of the Seven Dancing Servants of R’ynnhwn; and though the village had the reputation throughout the length and breadth of Adragharzh as a place of wealth and prosperity, second only to the cities of the Diacrectic League in the Archipelago Isles of Dragon Longing, it happened that a certain slavemonger named T’Prin, on the first day of the Month of the Quill (or more fully, Quillaamer’xhanderzjee), discovered that, though filled with rue, he must file a writ of surrendered suzerainty before the Judges of Ulm.

One ducat and eighty-seven pence. That was all. And sixty pence of it was in coppers. Coppers saved one and two at a time by haggling with the meatmonger and the wine merchant and the temple prostitutes until one’s cheeks burned with the silent imputation of parsimony that such close dealing implied. Three times T’Prin counted it. One ducat and eighty-seven pence. And the next day was the slave auction.

Listen. T’Prin was a slavemonger in the last days of slaves, when everybody owned them and made excuses. Owners said they couldn’t just free the slaves because they were like children in adult bodies, too naпve to get along in the world. And it wasn’t a good time to start paying them as hired hands, because crop prices were down. And slaves really were happier with someone else taking all the responsibilities.

T’Prin was a slavemonger in the last days of slaves, when shipping embargoes by emancipated countries reduced incoming supplies, when local slave owners felt guilty about buying new slaves, when the market fell through. He had been an honest businessman in a trade that people once said was necessary. He kept his stock healthy and always gave customers good value.

Still, through no fault of his own, he found he was bankrupt. And he had no idea what to tell his family.

A man sits beside a pond. It is night. The sky is full of stars, but he does not see them.

He throws pebbles into the water one by one. Each one gives a blooping splash, and rippling circles glide outward from the point of impact. When the ripples have died down enough that he cannot see them in the starlight, he throws another pebble.

His name is T’Prin. This afternoon, creditors came to his dirty shop on the edge of town and told him to get out. They had a written order from the Tribunal. They refused to let him remove a single thing from the premises, not even his father’s small library of books.

He had hated his job. He had hated treating people like animals. But as his father lay dying, the old man made T’Prin swear to keep the business going. It was the only thing his father had to leave the world. His mark. His legacy. T’Prin couldn’t find the courage to say what a shabby little legacy it was, so he made the oath his father demanded.

Tonight the business is gone, the oath broken. A friend told T’Prin he should be glad to get out of that squalid place. And so he should be.

He throws another pebble. It disappears beneath the water. Its ripples disappear slowly. The surface of the pond becomes clear as if the pebble had never been thrown.

Sometimes it takes a number of rewrites before I find a good tone of voice for a story. And sometimes the rewrites get out of hand…