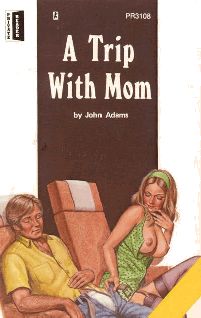 A trip with mom

A trip with mom

Lisa Hargrove was excited. In a short while she and her son, Danny, would be leaving for the tour. She was so excited that she was nervous as she tried to select the best dress to wear to the airport. She picked up one, then another dress; unable to make up her mind.

Glancing at the clock, the beautiful blonde mother saw that she had ample time. She relaxed and sat down on the edge of the bed.

Lisa was naked. She had not yet put on her panties and bra since leaving the shower. Her very large, yet firm tits quivered as she leaned over to pick up the panties that had fallen off the bed. The dark brown nipples were stiff.

"Mom!" Danny yelled through the closed door to her bedroom. "Are you going to be ready in time?'' "Yes, darling. How about you?"

"I'm ready now. I think I'll make myself something to eat while I wait for you." His footsteps could be heard moving toward the kitchen.

Lisa then thought that if it weren't for her son she wouldn't be going on the long trip. Danny had won a local contest for speaking in public. Through his victory, Danny had been invited to participate in a national tour to speak in many cities. All expenses would be paid.

Lisa loved traveling, and she would have taken advantage of any offer to travel for free. This chance came at a very good time. She had been more than bored recently, and needed a change of pace.

Her husband, Tom, had even been in favor of the tour, although it meant that his wife and son would be away for two months. Tom couldn't go because of his business, but he was also proud of Danny and was happy that his son had won the chance to make the tour.