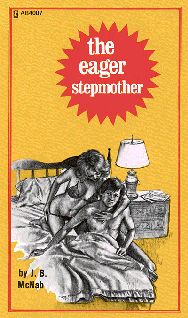 Scott Birks awoke with a throbbing hard-on. He scratched his bare chest thoughtfully, his fingers working through the thick crop of dark hair which grew in a mat from just below his shoulders. A moment later and he had run his hand flatly downwards over the hard stomach muscles to where his cock thrust stiffly and curved to almost touch his navel.

He clasped the hard prick tightly, the ache in his balls reminding him of last night and the farewell party. Never had he found Joan Allingham so good at fucking, and he put it down to the fact that it would be the last time the two couples would be able to get together again for some time. Tonight he would be in California where he was to open new offices for Condor Air Freight. It would mean weeks of hard work and trying to find a home for Robin and the kids. Hopefully, it would all be worthwhile, but for the first time he realized how Robin and he would miss Bill and Joan Allingham.

He clutched his cock and stretched at the same time. At thirty-eight he was in pretty good shape, and he turned his head to where Robin was quietly sleeping beside him, her long ash-blonde hair in complete disarray across the pillow and over her beautifully rounded shoulders. She was lying on her stomach, one knee folded upwards so that the shapely leg was in a loop, the skimpy, flimsy little nightie up around her waist so that her young, curved buttcheeks were completely exposed.

Robin was ten years younger, and his second wife. Martha Birks had died when Steve had been born, and for six years he had relied on his parents to raise Donna, who was now eighteen, and the boy. Then through Bill and Joan Allingham he had met Robin, found she was a terrific screw and four years ago married her. It was an arrangement which had worked beautifully, and any doubts he may have had about keeping up with a young, sexy stewardess had long ago been dispelled. Not only was she an excellent wife, but she had proved to be a fantastic mother for Steve and Donna, who both idolized her.

He half turned towards the attractively slender body and feasted his eyes on the curved buttcheeks and the outspread thighs. They were creamy white, and he moved one hand to place it furtively on a rounded cheek, the velvety smoothness filling his loins with a dull, churning ache.

Robin Birks sighed and rubbed her cheek against the pillow. She ran her tongue across sensuously large lips, coming to briefly before dropping once more into a drifting, hazy sleep.

He left his hand over the softly yielding bun, his fingers digging gently into the warm, soft flesh. His thumb pressed teasingly near her brown puckered bung, and he could just make out the thin covering of silky pussy hair around the rim of her cunt. The sight brought another surging ache to his balls, and he moved his hand slowly into the small of her back, upwards over her spine and then under the hem of the nightie before reaching around and beyond to her tit.

Her tits were like large oranges, not large like Joan Allingham's tits, but perfectly rounded, with no sag so that they always stood out as if taunting all the time. His open hand closed in to completely encase the beautiful tit, the nipple scratching his palm as his fingertips closed in around the exquisite base to probe and knead in a series of methodical squeezes.

"Mnnnn…" Robin Birks was vaguely aware of a dull, soothing warmth as it raced through her tits. The excruciating feel of a man's powerful hand, molding itself over her right boob brought a yearning to her cunt and she cautiously allowed herself to come awake as the hand became more active.