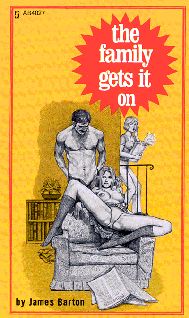 The family gets it on

The family gets it on

Tom Ward lay beneath the thin sheet, a fine sheen of sweat on his body. His eyes were closed and he breathed shallowly as he felt himself rising. As his cock twitched again, he fought desperately against thinking of that warm body, those firm tits and soft hands. A sudden chill took him again and he opened his eyes to glance toward his lovely wife, Linda, who lay naked beside him, sleeping peacefully on her back.

The sheet was thrown back and Tom raised on one elbow to look at her voluptuous body, tanned now from a week on the beach, and in the faint moonlight that came through the opened window, he saw her stomach rise and fall evenly. His eyes went to the honey-colored patch of her cunt, peeking now from beneath the edge of the sheet. He swallowed thickly and gazed at her face as his cock throbbed painfully.

"Honey…" he whispered and felt his heart beat heavily in his chest. "Linda… are you awake?" Tom swallowed again when he received no reply and he lifted the corner of the sheet carefully as he swung his legs over the side of the bed. As he sat up, he felt the cool ocean breeze on his body and he glanced again at his sleeping wife, then stood up cautiously.

Tiptoeing softly to the open door of the bathroom, Tom glanced once again at Linda, who had not stirred. He swallowed back his apprehension, stepped into the bathroom and eased the door shut. As he pressed the latch, the audible click sounded to him like a hammer falling on an anvil. He held his breath and listened for any sign of movement from his wife. When he heard none, he let out his breath slowly and went to the door that joined the bathroom to the second bedroom beyond. Again Tom held his breath as he eased that door open a crack.

Lying as still as her mother, Susan had thrown the sheet from her body. Tom fought the urge to clear his throat as he looked upon the form of his wife's daughter and a thrill went through his being as he gazed at her golden hair, haloed on the pillow, the fine features of her sleeping face and the graceful curve of her throat that swept to a pair of tits – the nipples dark and well defined, as were her mother's. Her right knee protruded from beneath the corner of the sheet and Tom could see the curve of her thigh beyond. His pulse quickened as he freed his cock from the loose boxer shorts he wore and he squeezed himself once, then again, and walked to the side of the bed.

He looked down at the girl's outstretched arm and the upturned palm of her hand. He knew what he was going to do – had known since they had all turned in for the night over an hour ago. It was an urge he had fought before – and lost to before. Now, he no longer had the strength to fight the terrible desire that every instinct in his being told him was wrong.

Tom leaned down slightly, lifted Suzy's hand and placed it on his prick. The touch of her fingers on his cock thrilled him in a manner that was beyond description and it seemed her fingers closed about his throbbing shaft of their own volition. He kneeled forward with one knee on the bed and began stroking his cock gently with her hand.

But Suzy was awake. She had lain there waiting for her stepfather since they had all gone to bed for she had known he would come – she had made sure of it as her mother had stepped to the back door of their beach cottage and called their dog, Pepe. Suzy had slipped her arms around his neck, kissed him on the chest and pressed her hot body to his as she whispered, "Mom's so lucky to have a husband like you, Tom…" Then she had nipped him playfully on his bare chest and bid him goodnight.