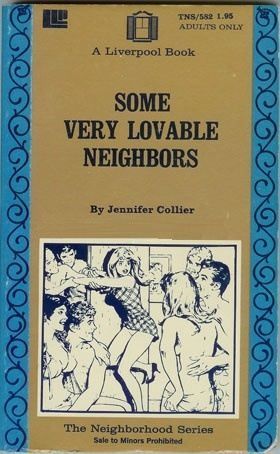 It was a small party – ten couples and a few unattached men and women – and it was, to Adie Rolfe's mind, rather a stuffy affair. Everyone seemed to be standing in little clusters, talking inanely of topics typical to cocktail parties: local and national politics, current fads and fashions, the Watergate, ad nauseaum. The hostess, a tall, statuesque blonde whose name was Luci Danton, circulated amongst the guests with a tray of various preferential drinks – and her longsideburned husband, Tom, sat next to a slim redhead on one of the living room's two couches, putting his hand on her knee almost possessively when he thought his wife wasn't looking.

Adie stifled an involuntary yawn, knowing that Jack and she should never have accepted the Danton's invitation. Jack had quit the Seattle Sentinal three weeks ago, and everyone in the paper knew why; as a consequence, minor reporters like Tom Danton thought it socially impressive to invite Jack Rolfe and his wife to their drab little parties. Yes, that was certainly the reason they had been invited; but they'd accepted anyway, knowing this, just to get out of their own house, to see some other faces, to talk with someone besides one another.

They had stayed home every night since Jack's resignation – they'd turned down two other invitations to social functions – because Jack was trying desperately to get his novel started, working twelve to fifteen hours every day, writing fifteen or twenty pages but throwing most of them away in anger and frustration. It simply wasn't going right, he had told her; the words wouldn't jell. The reason for that was a combination of things: the Department of Public Works was putting in a new sewer main on their street, and the noise of jackhammers and heavy machinery and large trucks was deafening at times; the phone seemed to ring continuously with calls from friends, well-wishers, dogs barking, power lawn mowers whining destroyed whatever moments of silence were left. He'd given it up this morning, calling the whole idea an abortion, saying that he wouldn't – couldn't – write another line in that house; he had to get away, he'd said, somewhere where he could be alone, in peace and quiet, to collect his thoughts and coordinate his ideas into the cohesive format of the projected novel.

And he had to do it damned soon, too; he'd already sold the book to a major New York hard-cover publisher on the basis of an outline alone, had been given a large advance (most of which was already spent on old bills and incidentals), and he had less than eight months in which to deliver the completed manuscript. It was to be a major, lengthy work, and if he was to meet that deadline he couldn't afford to lose any more time getting started.

When the Danton's telephoned invitation had come that morning, just after Jack's remonstrations, he had told Adie to go ahead and accept, what the hell; they might as well get out of the house since it was no use in trying to continue the novel.

Luci Danton came around to where Adie and Jack were standing near the large fieldstone fireplace and asked them if they would care for another drink. Jack declined politely, and she moved off again.