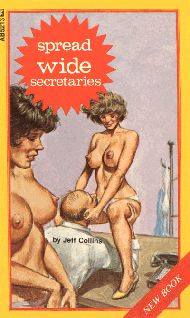 The shouted words coming through the thin wall separating the two bedrooms awakened Peggy Fair with a start. Then she realized: Nick Boros, her roommate's current bed partner, had stayed the night. And they were already at it again this morning.

"So what?" Nick chuckled. "She knows we ain't playin' chess in here. And, what the hell, maybe she'll get hot and want to join in!"

"You bastard," Peggy heard Norma moan. Then the succulent sound of a wet mouth going down over a hard cock arrested the rest of her mumbled words.

Peggy looked at her alarm clock. She groaned as she realized it was going to go off in another five minutes, anyway.

She pushed the covers back and stretched. She had slept in the nude and her body was a joy to behold. Her tits were firm and they reached towards the ceiling as her arms went over her head. Her nipples, still sleeping, nestled in the middle of their soft mounds. Her gaze swept down to the soft lines of her tits and belly to her blonde bush of pubic hair. The hair was matted and shiny. She had been too tired to shower after Bob had stormed out mad as hell the night before. His cum had dried on her cunt-lips and glued her pubic fur into a mat.