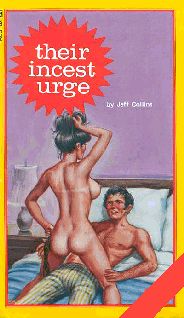 "That's naughty, Diane!" he said. "I'll bet your daddy would whip you for sure if he caught you playing with your pussy like that!"

Diane was whimpering. What her cousin said was true. Her father was very strict, and a real puritan. Sex was a taboo subject in their house.

"Play with yourself?" Diane's whimpering stopped. Suddenly she was curious. Ron had been staying with them for the summer, and ever since he had arrived Diane had been wondering how she could get a look at his cock. She had never seen a boy's cock, much less touched one, and she was wildly curious.

Ron was only two years older than Diane, but she was sure that the boy was experienced with girls.

"How do you do it? Play with yourself, I mean?"

"Like this." Ron pulled off his swim trunks, the only thing he'd been wearing when he entered the room, and fisted the long spike of his fleshy cock.