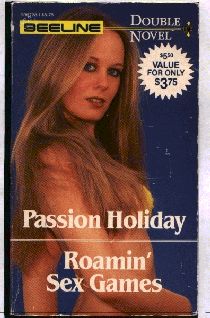 Pam was sitting, idly pulling the material of her thin dress up her thigh and back down again. It was a hot, humid day in San Francisco, and the dress clung to her in a maddenly sensuous way. She was thinking and remembering. It had become her favorite hobby lately.

Her blue-green eyes stared out of the ceiling-to-floor bay window, half-focusing, dream-like, on the busy people down on the street. They were all so intent, going to or coming from somewhere. The apartment was a modest third floor walk-up. As if mesmerized by the activity in the streets below, the five foot-six beautiful eighteen year old absently stopped caressing the dress long enough to light a cigarette, then let her hand drop back down to her soft, moist thigh again.

Mike. Ah yes, Mike! He was the one who had started all her desires brewing, the night he had made her a virgin-no-more. Mike, the high school football star, Mike the cherry-stealer. She remembered her own voice singing out in that car, parked by the fishing lake. "Yes, Mike. So good!" It had hurt, but at the same time felt so unbelievably good: And she remembered too, his voice, saying, "Oh, man!" as her hot, slippery flesh squeezed at his shaft.

She was away from that now, on her own in the big city. In the few months since leaving home she had been a waitress, a nudie model, and slept with both the manager of the restaurant and the photographer. And oh how she had come to love sex! She thrived on it, yearned for it, like a baby thrives and yearns for its bottle or breast nipple. She had found loving more fulfilling with older men, but somehow she wasn't remembering them now. Her memories were of young Mike.

She blinked her long, thick eyelashes, and pursed her ripe, red lips, thinking how much easier life would be if she wasn't such a warm, sensuous girl.

Pam pulled herself up and made her way into the bedroom. She sat before her mirror, staring at her reflection, thinking about the trip she was going to begin the following day. She wondered what adventure lay in store for her. She could imagine herself now on the white, sandy beach, soaking up the sun, listening to the rhythm of the pounding surf. Maybe a bronze god of a man would come along and begin an interesting conversation with her. She smiled to herself and picked up a hairbrush and began brushing her long, blonde hair.

The mammoth jet soared up and away, carrying Pam, winging toward her dream vacation. She could hardly believe that at last she was on her way. Resting her- head against the seat, she listened to the soft rush of the engines and let her thoughts wander. Her mind turned, as it usually did in such situations, to men. She mulled over the guys in her life, back to Mike.

He had introduced her to the joys of lovemaking, and ever since, she'd had a lustful craving for sexual gratification. She loved what she did to men – and the thought of what they did for her made goose bumps rise on her back.

She gazed down at the water far, far below the plane, the waves rippling, the bright sunlight dancing on the water. The sight made her sleepy, and soon her head dropped back against the seat and she dozed off. She dreamed of swaying palms, sandy beaches, blue waters and bronzed men. She awoke with a smile on her face and found that the jet was nearing the islands. The jet soared over Hawaii like a giant bird and glided into the airfield, coming to a halt alongside the terminal. Pam disembarked and claimed her luggage, found an old jalopy of a taxi and told the driver, an elderly copper-hued man, to take her to the Moalakoi Hotel. He started the ancient auto and they rattled off toward the hotel. The streets were quite busy with traffic. Pam watched intently from the back seat and found, as they rode along, that Hawaii was everything she had hoped it would be. It was large enough, but didn't appear too cluttered with tourists, and its quaint streets were filled with interesting shops.