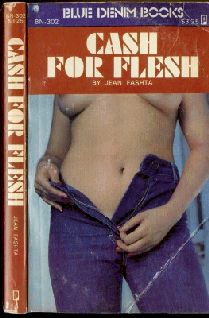 The Sudan, a sprawling stretch of desert land directly south of Egypt, borders on the Red Sea for only a relatively short distance on its northeast corner. The rest of this country, a place right out of the Arabian Nights, is all inland under a burning sun. And the passions of its people are every bit as hot as its torrid climate.

According to The New Hammond World Atlas the major products of the Sudan include "cotton, senna leaves, sesame, dates, ivory, salt and gold." There is another product of the country that is equally famous among those who know it intimately even though it is not found listed in the average reference book. That product is young male and female slaves.

A young Italian student who lived there for some months as a language tutor gave me the details which follow. In Khartoum, the capital city which sits at the junction of the White Nile and Blue Nile rivers like a huge obscenely brilliant jewel, young teenagers are auctioned off like cattle. During his stay in the Sudan this Italian student, Antonio, resided in the palace of a rich sheik named Abu Ben Said. Because of his privileged status as a tutor of the sheik's immediate family, Antonio was able to learn the most intimate practices of the family-sexual, as well as social.

"We'd go northwest of the main city toward Omduran. The slaves were auctioned in an old quarter of the city near the banks of the White Nile. At first I had to wait outside, but when Sheik Said knew me long enough to trust me, he allowed me to accompany him. He was a cultivated man who spoke several languages including Italian and English, and his sexual tastes were equally cultivated-well, jaded, I guess you might say. He was a big fat man, about forty-five, who had enjoyed every sex thrill you could think of at some time during his life. His favorite sex thrill was pederasty with adolescents. He claimed when a boy or girl got to be past their teen years they were past their prime. But at least he only used adolescents, never kids any younger like some sheiks do. There are plenty of Sudanese sheiks who groove on kids that are eight, nine, and ten years old or so! They don't even want the girl to have tits yet, or the boy to have hair around his cock.

"Once at the auction he pointed to a boy and girl sixteen years of age and confided, 'Mercy of Allah! Those two are brother and sister, I believe. Do you not see the familial resemblance? I must have that for my pleasures, Antonio.'

"He was right. And because they were brother and sister they came a little higher but he still bought them at a price ridiculously low by Western standards. Most of the slaves sold in Khartoum were the children of poor townspeople who could not support them and were more than ready to sell them to a rich sheik, thereby gaining money as well as the assurance that their children would never go hungry. The sexual servitude that the children would undergo was looked upon as a necessary evil.

"On the way to Sheik Said's palace we had to camp in the desert for two days since we traveled only at night to avoid the heat. During the early morning of the first day's rest the Sheik summoned the two new slaves to him to inspect them. The boy stood before Sheik Said with down cast eyes and his sixteen-year-old sister stood huddled close to him.