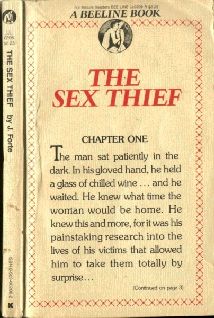 … and allowed him freedom from worry about repercussions-lawful or otherwise. He smiled to himself as he sipped his dry white wine… Patricia has excellent taste, he thought, and wondered how she would react to his tastes.

The headlights of an automobile splashed across the driveway of the modest home and the man watched through the window as the woman parked, stepped out of her car and reached back for her purse. He smiled again as she locked the door carefully, then turned and walked briskly up the narrow walk to the front door. He heard her fumbling with the security lock on the mail box and he set the glass of wine aside and stood to close the drapes quietly as she inserted her key into the lock of the front door. He walked leisurely to the alcove entrance of the home, stood beside the ornamental room separator and waited. A diffused light splashed into the narrow hallway as the woman opened the door and reached for the light switch beside the door.

"Damn!" she swore softly as she touched the switch and the light failed to come on. The man heard her sigh heavily as she set her purse on the low table near the door, then closed it with a slam.

As Pat walked toward the kitchen of her home to check the light panel, she was startled as someone stepped behind her, twisted an arm behind her back and closed a gloved hand over her mouth. Fear struck suddenly as she realized what was happening, and she struggled ineffectually against the man's greater strength.

As she ceased struggling, Pat felt the hand move from her mouth to her throat and a second pang of fear coursed through her trembling young body-but no pressure was applied. She swallowed thickly and asked in a choked voice, "Wha… what do you want?"

"Your cooperation," he replied simply, and twisted her other arm to the small of her back. With a practiced ease, he took two turns with a thin nylon cord and bound her wrists together.

"Please… please don't hurt me!" she begged as she felt something being placed over her eyes and struggled briefly, as the dim light inside her hallway was cut off; she found herself in total darkness.