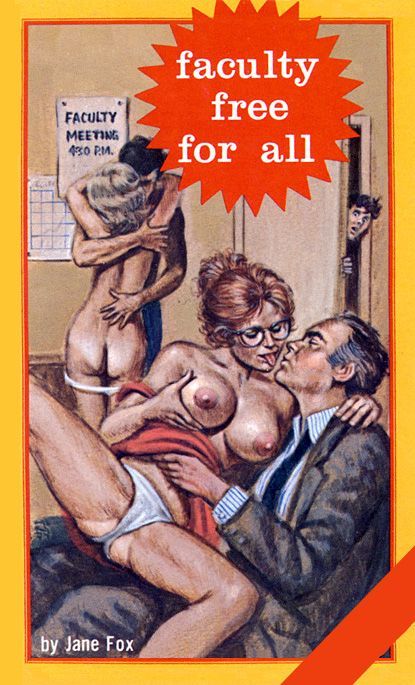 Alicia Gray threw her horn-rimmed glasses on the table and shrugged out of the modest, one piece gray dress she was wearing. She stood in front of the mirror and took the pins out of her long, red hair which was tightly pulled into a bun on top of her head, and let it fail in a cascading copper ripple.

"What a fucking bore!" she groaned, unclasping the tight bra she was wearing and letting her luscious tits swing free the way they used to do when she and Pete were living in Los Angeles.

Having disposed of her straight, school-marm disguise, Alicia looked just like the kind of girl she really was, wild and uninhibited. The disguise was a necessary part of her life though, since she and Pete had been hired to teach at Peaceful Valley, the private boarding school for young ladies and gentlemen of distinction.

Alicia didn't bother to slip into a robe. She walked naked to the broom closet and took out a fifth of gin, carefully hidden under a bucket of cleaning supplies. Vermouth was next and then a tall shaker, designed expressly for mixing the martinis she and Pete loved so well.

In less than a minute, Alicia was spread out on the couch sipping her first martini of the day. She finished it quickly, poured another and then rubbed her tits to try to take away some of the soreness the tight bra had caused.

Alicia gave a low moan as her fingers rubbed the darker pink tips of her nipples. She squeezed her titties and sighed deeply, thinking about how her life had changed since she moved to Peaceful Valley. Alicia was convinced that teaching history under the direction of Miss Sarah Snodgrass was a pretty dire fate. When she had come home from work in L.A., Pete had usually been waiting with the martinis already chilled. Some of their friends usually came over and more often than not, the afternoon and evening turned into a wild swinging party of fun and games. It was hard to even remember what it had been like, after two weeks of teaching history in Peaceful Valley.

"Mmmmmm," Alicia moaned as her hands moved down her graceful, curvy body. She parted the curly red hair on her pussy and slipped one slim finger into the moist, wetness. That was much better. She was finally beginning to get in a good mood after her grueling day in the classroom.

Alicia smiled seductively as she heard a key in the door. It was about time. She could hardly wait for Pete to see her spread out on the couch like this.