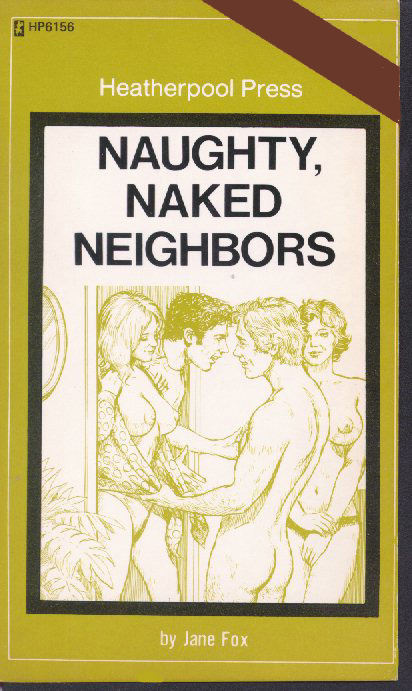 Nita Swenson gave one last swipe at the inside of the kitchen cabinet and leaned back against the table. Allen was still in the living room, finishing unpacking the books from the orange crates. Moving was a real drag and Nita was glad that they were almost finished. She could use a shower and a good meal.

Nita pulled the kerchief off her hair. The auburn ringlets were plastered to her head so tightly that she didn't think she'd ever get her hair clean. She unbuttoned the jean shirt she was wearing and tossed it in the new washer. Her jeans were added to the load and then her lacy white panties.

Nita walked to the living room, her full titties bouncing freely. She stood in the doorway and called to Allen.

"I'm going to take a shower, honey. I'm just beat from unpacking the kitchen stuff. Why don't you run down and pick up some hamburgers for dinner?"

Allen looked up and his mouth opened in surprise. Then a pleased grin appeared on his face. He never could resist the sight of Nita without any clothes on. Her titties jutted straight out like rocks the nipples shiny red marbles. Her pussy was just as beautiful as her titties, a soft, red powder puff of hair hiding the pink wetness inside.

"I think I'll take a shower too," Allen suggested, grinning wickedly. "Maybe we'll feel more like doing something once we get all nice and clean."

Nita giggled and her eyes twinkled. "If I take a shower with you, we'll never get out of there," she complained. "You know what happens every time we get in the shower together."

Allen grinned. "Exactly what I had in mind," he answered, starting to move toward her.

Nita squealed. She turned to flee but she made sure that she didn't move too fast. She really wanted Allen to catch her. She hadn't exactly been thinking about fucking, but now that the subject had come up, she wasn't going to miss out on it for the world. Fucking with Allen was always fun. She didn't care if she was so tired she could hardly move, the moment he touched her responsive cunt with his cock, new energy flowed through her body. Nita liked to fuck any time, any place. The shower was the most fun. Soap made everything slippery and fun. She felt a quiver of excitement flood her pussy as Allen's arms captured her and he kicked the bathroom door shut with his foot.

Nita adjusted the temperature of the water as Allen got out of his clothes. She was waiting in the shower with a bar of soap in her hand when Allen stepped in.