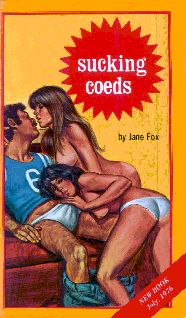 "I wish that disgusting old creep would just fuck off!" Virginia McRae sputtered as she checked her reflection in the dorm mirror. Even with her nose crinkled up in disgust, she still looked good enough to eat. Sure, she knew that the creamy mounds of her rosy-tipped jugs jiggled and bounced provocatively when she walked, but that didn't give old Professor Harris license to pinch her nipples every time he caught her behind the stacks in the library where she worked part-time.

"Oh, yuck!" Ginny exclaimed. The very thought of that old lecher was enough to make her positively sick to her stomach! If he'd only quit hanging around the rare-book section, working at the library might be fun. Professor Harris was the perfect stereotype of a dirty old man. If he hadn't have been so persistent about trying to pinch her tits or grab her ass, Ginny might have even thought he was funny. He was so repulsive that he looked like a cartoon character straight out of somebody's nightmare!

When Professor Harris had first come into the library, Ginny had thought that he was the janitor. He was absolutely ancient and he wore rumpled clothes that looked like he had slept in them. His teeth were all yellowed and his shin was pasty white. He looked like he had been locked up in a cubicle somewhere for years, without ever seeing the light of day, and Ginny pictured him working in a boiler room in the basement of one of the old college buildings, feeding the incinerator. You can't imagine her shock when she found that he was a respected member of the physics department!

Professor Harris had taken one look at Ginny and leered in a totally disgusting way. Then he had asked for a book kept in the stacks and had followed her as she went to retrieve it for him. As soon as they were out of sight of the head librarian's desk, Professor Harris had reached out and grabbed Ginny's firm ass.

Ginny couldn't believe it when she felt his hands grab her quivering butt-cheeks and squeeze! She had let out a little yelp of shock and had whirled around, only to find him grinning lewdly. He cackled loudly as he saw her shocked and outraged expression.

"What's the matter girlie?" he had asked as she moved quickly away from his clutching fingers. "Don't tell me no one's ever pinched your little ass before! You've got cheeks that just beg to be squeezed!"

Then he had lurched forward and grabbed both of the startled girl's bouncing tits in his hands.

"You just come and see me, toots, when you get tired of all the little boys on campus!" he had said. "Ask anyone! Old Harris knows how to prong the girlies!"

Ginny had practically thrown the book in his face and had run back to Miriam Simms, the head librarian, intending to report the whole incident.