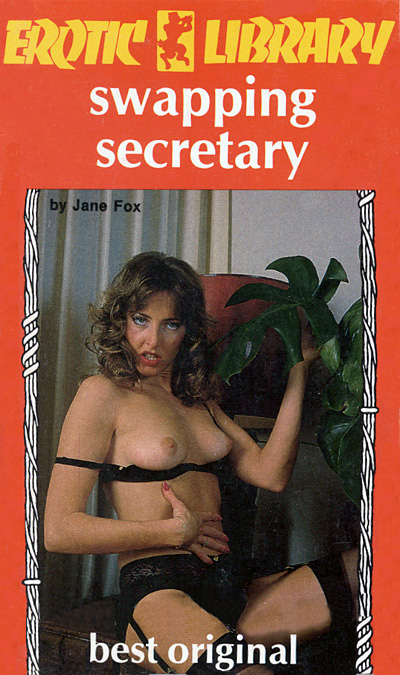 Rhonda McGrath brushed her long red hair into a shining auburn wave and sighed deeply. She managed to smile at her reflection in the bathroom mirror even though she didn't feel like it. She looked like the perfect picture of a loving wife, dressed in a transparent blue nightgown, getting ready for bed with her handsome husband Bill. She didn't feel loving, though. She didn't even feel excited, knowing that Bill was waiting for her in their wide double-bed. She just felt bored… bored with her husband and bored with her nice, safe, suburban life.

She knew that she looked good. Her titties still thrust out, high and white and firmer than any other thirty-year-old housewife in the neighborhood. Her waist was trim and her asscheeks bounced provocatively when she walked. She still got whistles from truck drivers when she walked to the market to do the shopping. She was a beautiful woman and she knew it, but that didn't help any. She was still bored with her role as a housewife and bored with her husband, Bill.

Thank God Bill didn't seem to be bored with her. He was always eager for their lovemaking… the perfect husband. She had been pretending to enjoy his kisses and caresses for almost a year now, but he didn't seem to notice the difference. She was glad that he didn't know how she felt. She was comfortable being Bill's wife, even though she was bored. She didn't want to change all that. She just wanted a little excitement. Life just shouldn't be this boring.

Bill lay back against the pillows and waited for Rhonda to join him. She was still in the bathroom, probably brushing her hair. He knew that she tried to look sexy and pretty for him. He wished he could tell her not to bother, but he didn't quite dare to say that. She seemed to be just as hot for his cock as she was when they first were married. He hoped that he could get it up again tonight. It was getting harder and harder to pretend that he was turned on by her. He loved her. She was a good wife and she had a terrific body. He wondered what was the matter with him. Other men didn't seem bored with their wives after only eight years of marriage. Maybe he should go out and get a mistress or something. He'd have to do something soon. He didn't know how much longer he could play the horny husband without a little outside help. Even his fantasies were wearing thin. Thank God she didn't seem to notice his lack of enthusiasm. He didn't want to hurt her for the world.

He drew in his breath sharply as Rhonda came in through the bedroom door. She really was lovely. She had an incredibly sexy body for a woman of thirty… really more lush and young-looking than most teenagers. Any man would be proud to have Rhonda his wife. He just wished that he could feel a little more passion at the sight of her beautiful body. He forced an eager smile on his face. There wasn't much he could do except pretend. He would try to imagine that she was one of the sexy models he'd seen at lunch. He was pretty sure that his cock would cooperate. It hadn't failed him yet.

"Come here, you little sexy doll," he growled, throwing back the covers and patting the bed invitingly. "Mmmmmmmmm, you look good enough to eat."

Rhonda smiled back, succeeding in looking sexy and eager. She wished that Bill would eat her. She had read all about that in one of his girlie magazines. It looked like fun, but she knew that Bill would never do it. He never did anything exciting or different. Just the same old wham, barn, thank you ma'am stuff.

She reached slowly for the light. For a second she wondered what would happen if she left it on. Would Bill turn into a tiger and ravish her? Would he tip off her nightgown and lick his wet, hot tongue all over her body? The thought of good old staid Bill doing those wild thing almost made her laugh. She turned out the light quickly and tried to pretend that he was a new and exciting lover, someone she'd met in a bar and whose body she had never had before. She felt a slight tingle in her pussy. Her fantasy was working. Now, if she could only hold onto it throughout Bill's clumsy attempt to fuck her, she might be able to enjoy it. Maybe she'd even have an orgasm at last.

Din stopped smiling the minute she turned off the light. It was easier this way. He could just fuck the hell out of her and get it over with for another night. He inched for her roughly and pulled her warm body against his.