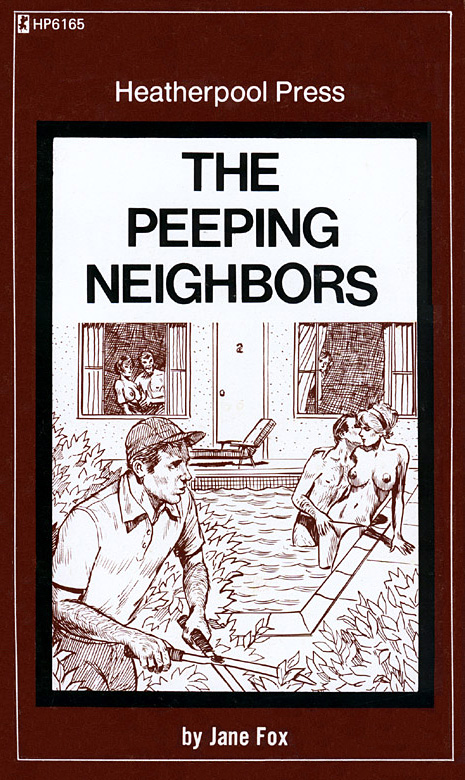 Vera Parker snuggled close to her husband on the couch. They were watching an old Western, but Vera was much more interested in Vance than she was in the movie. Even though she had spent six hours standing on her feet in the elevator today, she wasn't a bit tired. She pressed her lush body up against Vance's arm, brushing him deliberately with her full titties.

"Mmmmmm," Vance sighed, reaching out to fondle her full, warm nipples. "This movie's almost finished, honey. What do you say we turn in early tonight?"

Vera giggled. "That's fine with me," she said eagerly. She had worn her new pink nightgown and the perfume that Sharon McNeal had recommended. It seemed to be working too. She could see the hard bulge of Vance's cock in the flickering light of the television.

Vera was shy by nature, but she swallowed in excitement and reached out to run her fingers right over the bulge of Vance's cock. Sharon had said to go right ahead and tell Vance what she wanted. Sharon was the apartment's resident expert on sex. She and Vera were good friends. When Vera had mentioned that Vance didn't seem to be interested in sex any more, Sharon had given her lots of good advice, even helping her pick out this sexy new nightgown. Sharon's suggestions were working too. Vera almost giggled when Vance's prick jerked under her fingers. Sharon was right. You had to go right out after what you wanted.

"Mmmmm, that sure feels good, honey," Vance responded, taking his eyes off the television screen.

"Oooooh, yes," Vera moaned as Vance rubbed her titties, plucking at the rosy nipples with his fingers. The new nightgown was a huge success. Just wait until Vance found out what else she was going to do tonight. She was going to suck Vance's cock for him for the very first time. Sharon said it would drive him out of his mind. And she'd been tight about everything else so far…

"That's a nice nightgown," Vance murmured slipping his hand inside to cup Vera's full titties. "It's new, isn't it?"

"Yesss," Vera answered. Vance had never squeezed her titties this deliciously before. "I bought it especially for you, honey."

Vance grinned. Vera sure was sexy tonight. He could hardly wait until the movie was over so he could take her to bed. Right now he was getting much more interested in Vera than he was in the movie.

Vance chuckled. Then he hit the remote-control switch that turned off the television and the picture faded to a dot on the screen.

Vera looked surprised. "Don't you want to finish the movie?" she asked, holding her breath in anticipation.

"Uh… naw," Vance laughed. "I've got something else to do right now." His fingers slid down her body and cupped her hot, moist pussy. "I don't think you're going to last another ten minutes. You got to get it while it's hot, you know."