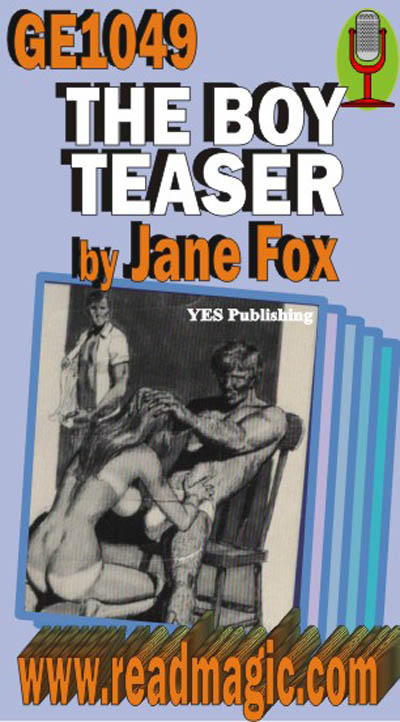 Carol Chambers closed her lovely eyes and let the bright noonday sun filter through her eyelids, casting a hot red light over the troubled thoughts that swam through her mind. She was sunningherself on her patio, lying on a chaise, clad in the skimpiest bikini she could find and enjoying the sun's penetrating warmth on her barely covered tits and cunt. She was lucky and she knew it. Carol was wealthy, having made a small fortune in the advertising business through hard work and some degree of ruthlessness. She was beautiful, beautiful in the lush, full, free-flowing way that made men wild to fuck her. She had friends, friends of the proper sort, friends whose attitude toward life was devil-may-care and morally loose, wealthy friends, friends who bored each other with a passion. She had everything, everything except happiness.

Carol Chambers, for all her beauty, for all her wealth, for all her fashionable aggressiveness, was unable to find the one thing in life she needed now more than anything else. She lacked a satisfying sex life, and the lack of it was driving her crazy. It wasn't that Carol wasn't chased after by men, far from it. She had had lovers, many of them. But something had always been lacking in her many affairs, something that she had only recently come to realize. It was not only the deep feeling of love and attachment that her affairs had lacked. It was also the freedom; felt within her; to give herself totally when she was getting screwed. She was frigid, at least more frigid than she should have been, and she knew it. She also had come to realize why.

Carol bad always had the ability to look inside herself and analyze her own inner workings. Perhaps it was an innate ability. Or perhaps the ability to see her drives and motivations for whatthey really were a cultivated trait, a trait arising due to the necessity to see the motivations of others in her advertising agency. Whatever the source of her self-analytical abilities she knew what her sexual problems were. Lately she had been thinking about such things constantly and not having a moment's peace.

Carol was thirty-five, and at thirty-five she still hadn't found the sexual satisfaction she craved. She wasn't sure that any of her friends had found it either but that was Utile consolation for her. Her life had to improve before the ravages of time began to show themselves. It was in this mood of unrest approaching desperation that she found herself on this particular afternoon.

She had been allowing herself to drift back in her thoughts to the night more than twenty years ago when all her sexual problems had started. Her daily plunges into the dark waters of her memory of that night had left her a bit exhausted lately. But Carol was strong of will and was determined now to find a way out of the maze of her sexual hang-ups. It all came back to her as if it had happened only yesterday.

Carol was an orphan, an orphaned child of parents who were killed in an automobile accident. There were no relatives to care for her and she was put into an orphanage. Luckily, because of her incredibly winning cuteness, she had been adopted at the age of three, only a few months after the loss of her parents. She remembered little of her experience in the orphanage. Of her experience with her new father she remembered much.

Actually she had been quite happy with her new family. Her adoptive mother cared for her as if she were her own child and her father, at least in the first several years of her life, exhibited toward her the same feelings of fatherly love that any father would have felt for his child. The situation suddenly had changed, however.

Carol had recovered from the shock eventually, having developed even at the tender age of eighteen the resiliency that had made her a success 'in business in later years. But her father had seemed totally unable to cope with his lack of a partner. He had always been deeply attached to his wife, and Sally's loss had nearly ruined him. His life had changed abruptly. Instead of the strong-willed and protective parent he had once been, Carol had found a weak, shattered excuse for a man.

Carol's disturbed father had quit his job and begun to hit the bars frequently, sometimes staying out all night or coming home with some drunken whore. On such occasions Carol had been whisked away in the night by her new aunt, a loving and protective woman whose memory Carol still cherished. Her Aunt Arlene had begun to stay at the house on an almost permanent basis to care for Carol since her father was neither capable to do so nor so inclined. Carol had been hurt deeply by her father's actions on his drunken nights. She still remembered the sluts he had brought home with him and the vulgar way in which he pawed them and engaged in the most obscene conversations with them in front of his eighteen-year-old daughter.