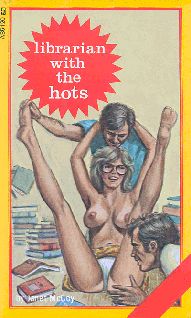 Librarian with the hots

Librarian with the hots

"Christ… I'm going to miss you when you're gone, Cathy!"

"I'll miss you too, Larry! I'll miss this nice big fat cock of yours! I… Oooooohh… sock it to me, baby!"

Larry had the pretty, brown-haired librarian backed up against the wall between two long rows of books. He was sending his herd cock deep up into her wet pussy in stroke after rhythmic stroke. She was standing on tiptoes, tilting her cunt upward a little to give him easy access to her greedy snatch. Her pussy-muscles seemed to spasm around his rigid penis each time he filled her. It was as if she never wanted to let him go. The feeling made him grunt with eager excitement.

"Jee-zuz, Cathy… they'll never get another librarian around here like you! Just the sight of you always makes my cock hard as a rock! And the nice part is…" He leered into her lust-dazed eyes.

"Oh Christ, screw me harder!" She felt his penis surge more urgently up into her tingling pussy. Her lower lip drooped as her face became a slack mask of arousal. "Oh, God-d-d… yes, that's the way! My cunt's so hot for you, lover!"

She had said nothing to indicate she had heard what the young man had said. But his words had registered. They had sent sharp little thrills of excitement darting through her half-clad body. They had told her that. Larry thought she was lewd, bold, whorish even. She turned him on. That was why Cathy enjoyed daring stunts like screwing customers right in the library.

"Ohhh yesss. So good! So good! So good!" Her pussy ground up to meet the hard-driving cock on each lunging impalement. Cathy was like a machine – a machine tuned to pleasure. She stared wild-eyed up at the wall clock at the other end of the double line of books. It said eight-twenty. She pulled her skirt up higher over her hips, until she was naked from the waist down. She enjoyed the cool rush of air over her sensitive belly. What did Cathy care what time it was! Cock – stiff, filling cock – that was all she cared about! That was all that existed for the moment in her private little universe of lust.

The incredible maneuvers of Cathy's loose jointed hips made Larry grit his teeth. Her belly was grinding round and round in tight little circles. Every move she made brought a new pang of pleasure-agony from his palpitating penis. The student had never known a woman who could make everything work at once, the way Cathy could. Once again he regretted the hard fact that she would soon be out of his life. Soon, study nights at the library would have lost all their special attraction.