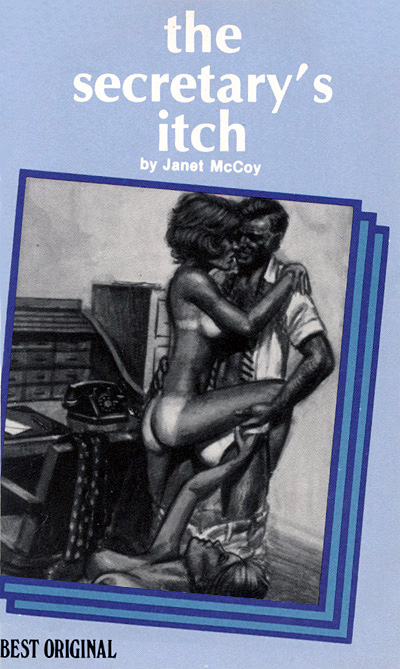 The shapely redhead had her black skirt pulled up over her hips. Her hand was violating the sanctity of her black panties. Two fingers sawed in and out of her wet pussy.

She was standing against the hotel-room wall, facing Ken Adler.

The young man, still fully-clothed, sat on the bed watching her. He was mesmerized by the sexy way she looked at him. Her eyes were glazed with lust. The lids drooped with sensual preoccupation. Her lips, full and red, pouted at him.

"Mmmmm, baby, my pussy feels so hot and wet inside! It's really turning me on, doing this in front of you… feeling my cunt, playing with my clit. Oooooohhh, feels good!" Her eyes closed for a moment. Her whole face was wreathed in a sexy glow. Her body quivered in ecstasy.

"Shit, woman, you're the sexiest bitch I ever met in my life!" he told her. He could feel his cock pulsing inside his pants.

He had met the lovely redhead less than two hours ago, in a bar just down the street from the hotel. It was the last night of his business trip. He was feeling lonely and bored.

Then she'd come up and introduced herself to him as Masie… Masie Owens, she said. A lonely country girl looking for a good time in the big city.