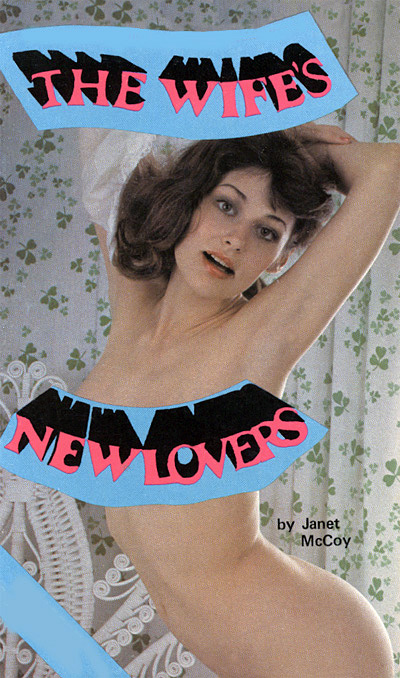 Jean had just about reached the limits of her frustration. It had been two weeks since she and her husband Todd had fucked. The sensual young blonde didn't know how much longer she could go on this way.

Her wet pussy throbbed with passion as she squirmed under the covers. Jean realized she would have to quell the fires of arousal with her hand again. Now and then that was fun. She enjoyed playing with herself, bringing herself to resounding orgasm in her lonely bedroom.

But her fingers were no substitute for good hard cock. As long as she was getting all her satisfaction from her hand, there remained a seething ball of frustration deep in her belly and it kept building and building, until she was ready to scream at him. Anything to make him know how much she needed him!

She looked over at the clock on her bedside table as her fingertip slipped round and round the peak of her swollen clitoris. It was almost eleven o'clock! "Todd, why don't you come home?" she moaned as her hips wriggled down, demanding more of the lewd stimulation of her groping fingers. She drove one finger deep into her cunt. It was incredibly hot and wet in there. One finger was not enough! She tried two.

It was hard for dig voluptuous blonde, to how her husband could ignore her lusty willing body. Jean spent a lot of time in front of the mirror. She knew she was beautiful. She was in her prime – twenty-four years old with high firm tits and a round shapely ass. She got all kinds of admiring looks from men when she went out. Why couldn't she get some of that attention from her own husband? While she lay fingerfucking herself and moaning for attention, Todd sat in his office working over lists of figures, figuring out good tax dodges for his clients. It just wasn't fair! She hadn't gotten mated to ride her own fingers every night!

Suddenly the front door slammed and Jean pulled her hand from her cunt as quickly as if it had just bitten her. Todd must know nothing of the sordid way she sated her appetites in the lonely quiet of the night.

When he walked into the bedroom, he looked bright-eyed and happy, not at all the way she would expect a hard-working accountant to look after a fourteen-hour day. Todd was amazing. He always seemed to have so much energy, except for her and her needs. He generally fell asleep almost as soon as his head touched the pillow. She was determined that that would not happen tonight.