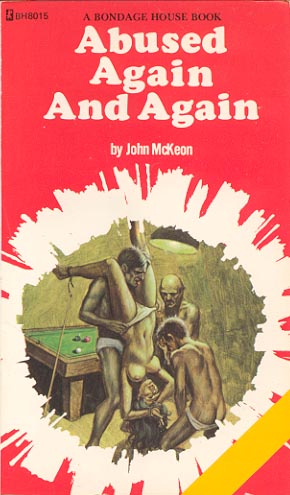 At eleven-fifteen Friday night in the airport parking lot, Ginger Martin waited apprehensively for Roger to walk around the Mustang with her suitcase and open the door. And when he did open it, Ginger started to get out, but Roger blocked her way. "Not yet, baby," he said. "It may be a long time before I see you again."

Ginger heard Roger's fly unzipping. She looked down as his huge cock flipped out of his pants. Roger's cock was the most magnificent thing about him. Every time she saw it, she could not help getting excited. His cock was over eight inches long and as fat as a club. His purple knob seemed to pulse. Roger Swain spread his legs and poked his cock at Ginger's face. Startled, Ginger flinched back and looked around nervously.

"Someone will see us, Roger!"

The sight of Roger's erect cock was too much for her to pass up. Her mouth watered to have his throbbing knob sliding wetly over her tongue and poking deeply into her mouth and throat. The satiny texture of his cock head touched Ginger's lips. She tasted the tiny drop of clear fluid oozing from his slit.

Looking quickly around the parking lot to make sure no one could see them, Ginger opened her mouth and sucked Roger's cock into her mouth. Bobbing her head up and down, Ginger drove Roger's cock back and forth over her tongue. Roger's cock tasted like warm, succulent meat. Every time Ginger saw Roger's cock she felt an urgent need bubbling up inside her. How would she ever be able to live without Roger if he got caught? Ginger pulled her mouth from Roger's cock and begged him to go with her.

"I can't," Roger said, burying his fingers in Ginger's hair. "The police are going to be looking for me everywhere. It'll be safer for you if we split up."

Roger twisted Ginger's hair until the dark strands were like a harness around her head. Roger pulled Ginger's mouth back to his cock and forced his knob between her lips. Ginger took his throbbing knob back into her mouth and bathed it eagerly with her tongue. If it had to be this way, she would have to make this time last until Roger could get the horrible mistake with the police cleared up.

As Roger began to drive his cock back and forth between Ginger's lips, Ginger felt her arousal building quickly in her cunt. Juices oozed from her slit and began soaking her panties. She wanted to pull off her clothes and spread her thighs so Roger could bury his mammoth cock in her cunt. But there was not enough time. Eagerly, Ginger sucked Roger's knob, feeling his rhythmic pulse against her cheeks and tongue.

Roger groaned and tightened his grip in her hair, twisting the strands of hair tighter until Ginger's head was pulled against Roger's crotch. Roger's walnut-sized balls slapped against Ginger's neck each time he hunched his hips forward. Ginger relaxed her throat muscles and arched her neck to help Roger's cock penetrate deep into her throat.