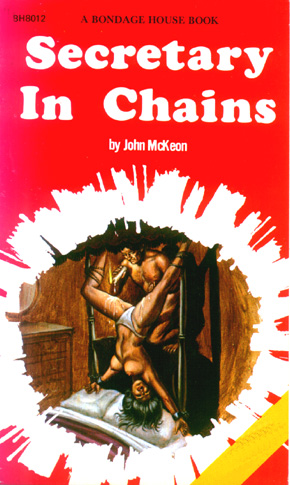 Fay Robinson pushed open the wooden sauna door. Dressed in a light skirt and blouse, she felt foolish walking into a steaming room to deliver some papers to the tennis pro at the Grand View Tennis Resort. Fay turned and looked over her shoulder at the young man motioning her to go in. He smiled reassuringly at her and winked. Fay turned back and stepped resolutely into the sauna room, the heavy door thudding ominously shut behind her. Immediately the steam began gluing her blouse to her flesh, causing her shapely breasts to stand out starkly.

At first she could see nothing through the vapor. "Jerry Hunt?" she called timidly. Someone stirred to her left and grunted. Fay stepped closer and stopped frozen when she saw the naked man and woman locked together, lying on towels spread over the wooden bench against the left wall. They both saw Fay, but they were so engrossed in their wild fuck that they didn't stop their obscene gyrations even at her interruption.

Fay realized she had been made a fool of by the man outside. Her first day as a secretary at the resort could not be going worse. Fay stumbled backward until her shoulders hit the door. Her movement through the room caused a path to open in the steam so that the two fucking bodies were clearly visible.

Despite her embarrassment, Fay's attention was drawn irresistibly to their churning bodies. She felt her own body burning with shame. The steam had plastered her clothes to her skin and between her legs, and Fay felt the twinge of desire stirring in her cunt.

It had been so long since Fay had made love with anyone. Not, since separating from her husband over two months ago. At twenty-two, Fay's need for sex was strong. She felt ashamed of herself for thinking such lewd thoughts. Fay tried to escape, turning and pulling frantically at the door handle, but the door wouldn't budge despite the fact that the handle turned. It was almost like someone was holding the door from the outside. Panic filled her as she tugged with increasing urgency.

Behind her, the man and woman began moaning and clawing at each other as their passion flared. Fay looked back at them. As the man's athletic body tore lustfully between the woman's hungry thighs. Fay found herself unable to take her eyes off them. She felt as though in a dream or movie. The actors performed to excite her. She couldn't stop the way her body responded to them. A flush spread over her feverish body. Fay felt every nerve in her deeply tanned skin vibrating with forbidden desire.

Neither Jerry Hunt nor the woman seemed concerned that they suddenly had an audience. The woman's heels pounded into Jerry's ass, urging him to drive his big cock deeper and deeper into her pussy slit. Jerry's cock plowed like a cudgel between the woman's stretched cunt-lips. Over and over Jerry drove his hips forward, each thrust forcing a grunt of pleasure past the woman's lips; Fay felt herself wishing it were her own cunt that Jerry Hunt was fucking with such urgency. Fay's hands lowered from her breasts and caressed their way down her stomach to her crotch. She pressed her fingertips against her crotch, feeling the slit dividing her cuntal mound. A new surge of sensual energy flooded Fay's loins. She began drawing her skirt up her thighs until her fingers had free access to her pussy, covered only by the thin white fabric of Fay's bikini panties.

In the unreality of the misty sauna, Fay did not even realize the brazen way her fingers aroused her own flesh. She pressed through her panties to massage the dripping center of her cunt, feeling the burning passion building and building in her body. Fay gulped in air, causing her large tits to rise and fall provocatively as Jerry continued thrusting deeply between the woman's spread thighs.

The woman's fingers pulled Jerry's head to her breasts, guiding his mouth from nipple to nipple, arching her back to cram as much of her tits into his mouth as possible. Fay was enthralled by the performance Jerry gave, snarling and feasting at the woman's breasts, at the same time spearing and sawing his slick cock into her pussy with the confidence he undoubtedly displayed on the tennis courts as well.