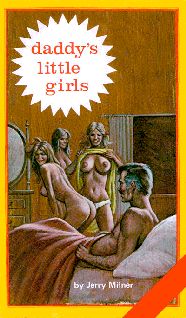 "They're going to fuck!" Betty whispered to Lynette, as the eighteen-year-old cousins looked in through Olive Cook's window.

Red-haired Lynette glared at blonde Betty and shushed her. Lynette didn't really want to look, but she couldn't help herself Betty always got her to do crazy things when she came for her summer vacation visit. Peeping in at Mrs. Cook and Russ, was a crazy thing to do. Lynette didn't want to watch them fuck. The very thought of fucking frightened her. But Betty, having been raised on a farm instead of in a city, was excitedl interested in it. Lynette wished her father and mother hadn't left them here alone with her brother. There was no telling what trouble her mischievous cousin might get them into before Lynette's parents came home. She also wished Russ would just get up and leave Olive Cook's house, but he was showing no signs of doing that at all.

The woman and teen were sitting on the living room couch. The shapely woman tousled Russ' brown hair, laughed, and smacked another kiss on his lipstick-smeared mouth. He looked startled by it all. He had probably been startled ever since she had opened the door wearing only black panties and a brassiere. She had very big tits for such a small woman. They were bigger than Lynette's growing titties and even bigger than the high, thrusting beauties that had sprung out on Betty's chest in the past year. Russ kept looking nervously down at Mrs. Cook's tits while she fingered his hair.

"You picked a good day to come and collect," she was saying. "With my boyfriend out of town, it's nice to have a man around the house again. What's the matter, Russell? Are you flustered cause I don't have all my clothes on? Would you feel better if I went and put on a dress?"

"Then what's the matter?" Mrs. Cook touched the nape of his neck. "Don't you like kissing girls?" she asked, moving closer to him and wetting her crimson lips with her very pink tongue.

"Sure I do," Russ muttered.

Mrs. Cook smiled and kissed him on the lips.

"They're Frenching like crazy!" Betty excitedly whispered. She had read about this sort of kissing all winter long, in the spicy romance books she'd found in her parents' closet. She had read about all sorts of wild things men and women did together, but she'd never had the chance to do them herself. Now her stomach felt funny and her pussy felt all wet and itchy as she watched them swapping tongues. She squeezed Lynette's hand very tightly all through the long kiss on the couch.