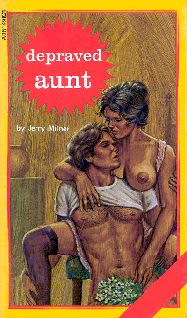 Ellen sighed and gingerly laid half the length of the electric facial massager against that most needful part of her body, directly between her legs. It was the sensible, logical way for a young widow like herself to ease away tensions without involving herself with sticky relationships. The facial massager had been a wise purchase, discreetly done through the mail. With it, she could live a much more contented and tranquil life in the suburbs, puttering around in her garden, doing her needlepoint, ignoring the neighbors who so pointedly ignored her, forgetting about her runaway daughter, Carole.

She reached down and twisted the knob that set the massager to buzzing, and at once was amazed at the thing.

Ellen's panties were now on the shag carpet in front of the couch, along with her white linen shorts. She was up on the couch, still wearing her blue halter top, and trying to catch her breath in order to catch up with the dynamically warm tinglings spreading out from between her widely parted legs.

Her posture on the couch was obscene, and she loved it. Leaned back against the cushions, she had her bare feet on the edge of the couch and her knees up and widely out. Her cunt, smoothly bordered with fine black hair that rose to a tuft on her pubis, had its frilly pink lips wide open and already watering for more of the dildo's caress.

Her neighbors wouldn't like her posture there. At least the women wouldn't. But the husbands, if they saw the young widow Grant like that, they'd be lined up around the block to push their big, hot cocks in her cunt, to slide their stiff clicks in and out of Ellen's cunt while they played with her stiff-nippled tits and stuck their tongues in her mouth and her ears and made promises they'd never keep. Ellen wanted every cock on the block to go plunging into that black-haired cunt that had been dormant for too damned long, but she wanted none of the men that went with those hot cocks.

She closed her smooth white thighs on her dildo and softly moaned. She stretched out her legs from the couch and clamped her thighs hard on the wonderful thing and whined at how good it now felt with her asscheeks rocking back and forth on the edge of the couch and her body arching and writhing and shuddering, she jammed the miracle cock against her wet cunt and knew very well this was all the cock she'd ever need in the future. She was panting when she relaxed from the first orgasmic tinglings she'd known in far too long. And she was panting with the anticipation of sliding that beautiful thing right up inside her cunt.

Ellen smiled as she assumed her former position, knees widely parted, soles of her feet pressed together. She was smiling down at her cunt, a beautiful part of her body, neglected for far too long. Oh, how her husband Lou used to love to kiss it and tease it and tickle it before he eased the big knob of his cock in that hole. He used to worship her beautiful body, used to spoil it with his tongue and his cock and his hands. Now all she had was her dildo, but that was a whole lot better than nothing.

And getting better all the time.