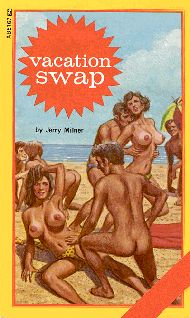 Howard eased his thick, hard cock in the tight, slick cunt of the barmaid at the Iron Door, with a sigh that rumbled up from his guts. It was a hot, clasping cunt, just as one might expect to find between the long legs of the sultry-eyed redhead. She had leered at him so lasciviously each time she had brought him beer the night before. Spiked heel shoes on her feet, mesh hose on her legs, a little doily of a skirt on her powerful hips, and a pair of tits that jutted out like a pair of artillery shells inside her blouse – he could see all of her clearly, as long as he kept his eyes closed. He drew back his hard cock and shoved it into the statuesque barmaid again, expecting to hear her say, "Oh, Howard, I knew you'd be wonderful in bed, but I never expected this! Don't ever stop fucking me! Howard, give me everything you've got, forever!"

Beneath him, his wife, Marge, gasped, "Howard, let me breathe!"

They were having a morning fuck in the bed that belonged to Howard's sister, Jayne. Jayne Bowers lived in Carlton, Oregon, where she raised roses for sale to nurseries. Howard and Marge Denton lived in Plymouth, New Jersey, where they raised carnations for sale to wholesale florists. The two families had exchanged houses for two weeks during the slack time of the year, as a kind of a working vacation for both of them. The widowed Jayne, childless herself, had graciously consented to take care of the Dentons' teenaged son and daughter. Howard and Marge were taking care of Jayne's dog, Trigger Scruggs. And at the moment, Howard was taking care of his wife, something he did very rarely of late, and then only when he had recently seen some sexpot woman he could fantasize about while fucking his wife.

"Okay, then you do the work," Howard said, and rolled his big, portly body over, easily taking his diminutively slim wife along with him. There he settled down, eyes closed, lips smiling, dreaming about the spectacular broad who was wasting her time in an Oregon beer bar, when she could have been knocking them dead as a Las Vegas showgirl.

Marge was used to being on top when they fucked. It was always the position they wound up in when Howard was able to perform his husbandly duties. It was more work than pleasure for her, but the work wasn't hard. She had strong hips and thighs, as was indicated by the size and the firmness of her smooth, round buttocks, so she could fuck in this position for a good long time. It probably wouldn't be long, however, before Howard's cock went soft, or until he came. Marge didn't care which of these things happened, just as long as one of them happened soon. This was her vacation, and after taking care of her chores, she had things to do, like walking in the woods, and breathing the scent of the pines and the cedars. She fucked Howard a little faster, adding some twists to her humpings and watching his face for any reaction. Her cunt was nice and wet. It usually was. She might be able to cum if she concentrated on it, but she'd been disappointed by Howard's abrupt finishes too often before to even try for an orgasm now. She kept up a fast, steady pace, buttocks bouncing, pendant tits doing a dance between them. Howard grinned and licked his lips.

"Are you finished?" Marge asked, for he was going soft in a hurry.