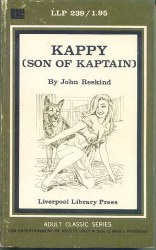 Jean Wilson could not rid herself of the feeling that they were being unduly persecuted. She studied her young husband of five weeks who stood on the opposite side of the bed watching as he removed his shirt and trousers to reveal his lanky frame, a tender emotion of deep affection filling her. They had done nothing… absolutely nothing, she reasoned incredulously as she unzipped and stepped out of the maid's black, petite uniform that the Keeles insisted she wear. Yet, there they were, serving a ridiculous probationary period, and all because of a miserably decrepit judge…

"It could be worse, honey," her husband spoke assuagely, interrupting her thoughts, the warm smile brightening his sharp-angled, boyish features meant to lessen the oppression that had been with her since Judge McGraw had sentenced them earlier that day. "So, we didn't know anything about the damned grass Nick had… they could still have thrown the book at us. Ignorance is no excuse, you know… and I'm thinking that if it hadn't been for Chief Lannigan and Max Keele… well, we'd both be taking a nice hike…"

"But how could we know Nick had marijuana on him? My God, we had just met them not an hour before… then, like a pair of idiots we had to go along to their party," the seventeen-year-old, honey-haired girl reflected lamentably, her wide and innocent green eyes puddling with tears as they had time and again throughout the ordeal of the past ten hours.

"I know… I know, baby," Ken Wilson conceded, sensing the lump rising in his own throat at the little tears trickling down her angelic face. He stood awkwardly running his hands through his own long, chestnut hair, his shorts alone covering his nakedness.

Damn, what a fine beginning he'd gotten them off to! Married five weeks, eloping the way they had against her parents' wishes, and now this mess. Her father'd been right… he'd never amount to a "row of ashcans"… college dropout, vagabond… a worthless bastard at twenty, that's what he was. Hell, he'd had no right marrying her and he'd known it from the start, but he hadn't been able to help himself… he'd loved her from the first moment that day he'd seen her on the beach, reminding him of a golden Venus in her tiny white bikini… just as she did at that very second, her wispy nylon panties and abundantly filled bra enhancing the curvaceous loveliness of her golden-tanned, satiny-skinned body.

"… If only we'd never met them, none of this would've happened," Jean persisted, unable to shake her dejection as she turned and walked to the vanity for a facial tissue.

Ken swallowed tightly, his discerning eyes automatically fixing on the provocative rippling movements of her curvaceous young hips and perfectly ovaled buttocks, the length of her blonde silken hair falling to the middle of her back, her slender, waspish waist and long, shapely legs. He felt a stirring inside his shorts and mentally berated himself for harboring such thoughts at a time when she needed consolation rather than him on top of her.

"How could we know, Jean, honey?" he questioned, moving around the bed toward her. "They seemed like right guys… and they were… I mean, a couple of joints in a cat's pocket doesn't make him public enemy number one just because the establishment decrees it so. They were just three ordinary guys knocking around the country and trying to find themselves is all…"

"Oh, I know, darling, I know…" Jean sobbed, dabbing at her little nose and big eyes with the tissue as she turned to face her new husband. He opened his arms and she quickly drifted into them, as if welcoming the security of their strength. "It was that terrible judge… I feel certain that Chief Lannigan intended to let us go. He seemed to believe us… but then something happened after Mr. Keele came, and the next thing I knew we were being arraigned in court… Oh, if Daddy ever finds out…"

"There, baby… now don't start worrying about that," Ken tried at reassuring her, stroking his hands over the smoothness of her back as he pressed her to him, feeling the firmness of her resilient breasts against his naked chest, his hands caressingly grazing downward to clutch the softly yielding moons of her young buttocks and draw her snugly to him. "Your father is two thousand miles from here. Besides, it'll all be over before we know it; three months isn't long… and at least we'll be together."