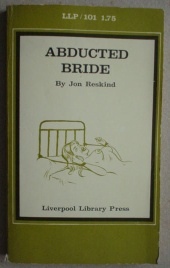 The smooth trim Marseille Express burrowed its way swiftly through the clear night of the French country side. A large pale summer moon hung low in the distance.

Kevin Taylor watched its shimmering light moving against the darkened ceiling of his sleeper compartment. It flickered hypnotically in unison to the rhythmic roll of the train beneath his bunk. Cool air from the open window played across his naked well built body which covered the whole of the narrow bed. He was alone.

Damn, he thought miserably, what a hell of a way to spend a honeymoon.

He drug deeply on the almost finished cigarette squeezed tightly between his thumb and forefinger. His brow was wrinkled in deep thought.

He had reason to think. Ahead of him in Marseille his bride was waiting after running out on him their first night together in Paris. Utter, utter stupidity, he grimaced, the details of their last hour together flickering through his mind like the reel of an old silent movie.

Perhaps he had been a little rough, but by God she had it coming to her. He had fought with her the entire year of their engagement about giving in to him and had tried to explain that virginity had gone out of style. Two people in love just didn't wait anymore for marriage, they relied on their love and trust and not some legal magic a ring was supposed to bring. She had not listened to him then and had even refused to discuss the matter though they had come close to making it together several times in the backseat of his car. She had always drawn the line just at the last minute. This was the part that had driven him crazy. He had come so close to possessing that luscious body so many times and had been left in frustration so many times that his control had been destroyed completely. He had even stopped parking with her when they had gone out on dates for fear of what he would have done.

With her conservative New England upbringing, she would never have consented to marry him if he had resorted to force and that's just what he would have done sooner or later. He did love her very much and didn't want to destroy their relationship by some uncontrollable act that he may have committed in the heat of passion. She was too fine a girl for that.

He had to admit, in her favor, that he had nothing else to complain about. She was almost perfection personified in all other respects. In fact, it was that perfection and his piled up frustrations that caused all the trouble back in Paris. That damn body was too perfect!

Things may still have been all right that first night if she hadn't insisted on taking a plane to Paris right after the ceremony. He would have preferred to stay in New York for a few days and take their time in getting to know each other. But, Jean had insisted on Paris immediately. That had meant sitting next to her on that fucking airplane for another seven hours. All that ran through his mind during the entire trip was, where he should hare been at that moment. After all, she had been stressing the ceremony all these months and that was over. She was legally his now and he still couldn't touch her.

It had just been too much. By the time they arrived at the hotel in the center of Paris he was almost out of his mind – and then – she had appeared in the bathroom door in that flimsy hip length nighty. He had gone crazy.