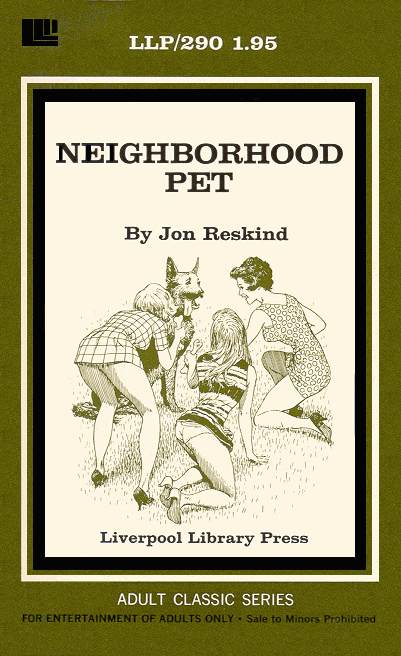 The sleek German shepherd stretched out his long sinewy body on the cool of the kitchen's rubber-tiled flooring to watch the golden-haired young wife move about her household duties with an air of feminine efficiency. He chose a corner, his favorite vantage point, and a spot he had come to consider as his own since his arrival at this new place. Though at first it had been strange to him and he had sadly longed to be with his real mistress, the warm affection shown him by the young woman and man had soon won his fervent attachment.

What was even more exciting and new to him was the freedom he had here. Before, he had been allowed outside only in the company of his mistress and leashed, but here he could come and go as he felt the urge, freely exploring the alleys and neighboring yards where other friendly young wives gave him bones and sometimes even took him into their houses. Of them all, though, it was this pretty, long golden-haired girl who answered to the sound of Karen that he preferred to be with. She fed him well and petted him often, making soft little cooing sounds that not only pleased him but set his great heart to beating faster. It was the lack of such attention this morning which gave the powerful animal his feeling of slighted uneasiness, and he watched her with unflinching, devoted eyes, instinctively knowing that all was not right with her…

Actually, Karen Smith thought to herself, as she rinsed the dishes before placing them in the dishwasher, she was being a little childish about the whole thing. Steve wasn't wholly at fault this time. After all, they had awakened later than usual and she should know after eight months of marriage to him what a stickler he was for being on time at the office. With only an hour for him to shower, shave, dress and eat breakfast, then drive into L.A. proper, she'd been just a bit unreasonable enticing him into making love to her. But after last night's big let-down on his part, she'd popped her eyes open this morning with the same sensual coals still smoldering inside her. Of course, he'd had too much to drink the night before at the Keller's dinner party… or maybe not enough, she wasn't certain which, they both did so little of it. But for some unusual reason, he'd been like a damned rabbit in bed, just whipping right off and leaving her in the middle of her passionate climb, dropping almost immediately off to sleep, while she'd lain there beside him in excited arousal for over an hour before she'd fitfully dozed off.

It was little wonder to the twenty-two year old, curvaceous blonde wife that she'd awakened in no less an erotic tizzy than the sizzling state which sleep had temporarily banked through the night. But to endure a repeat fiasco within eight hours had been almost more than she could bear! Only the fact that she knew he would be late for work if she made an issue of it, had kept her from breaking right out in flustrated tears! Like a propelled young athlete trying for some sort of an olympic record, he'd raced his lengthy, swollen hardness in and out of the heated, liquid sanctuary between her legs, quickly seeing to his own needs, then hopped from the bed while she lay there panting!

"Sorry, hon… but I really got to make time, now!" he'd weakly apologized, wiping off his deflating penis with his soiled shorts as he moved toward the bathroom. Then, at the doorway, he'd turned and promised: "Look, I'll make it up to you tonight, Karen… for sure. We'll go out for cocktails and dinner, just the two of us… and after, we'll come home and have a real party. Okay…?"

"O-Okay… all right, darling," she'd feebly answered, somehow managing a smile for him before he'd darted into the bath, closing the door behind him.

Well, at least he had understood the whats and whys of her frustration, she'd thought as she lie there, fighting the tremendous urge to finish the task with her finger before he popped out like a jack-in-the-box from the shower. But she hadn't and for personal reasons known only to herself. When she'd married Steve Smith she'd hopefully put the need for self-gratification behind her, and to this point she had not violated that optimism, for once begun it would be too easy a practice to continue.

Karen was quite aware and certainly unashamed of her carnally amorous nature, and so far, her slender, loveable, unhomely young husband had shown his appreciation of it to the best of his limited ability. There… there she went again, privately deriding him with that one word, 'limited'… and after vowing to herself only several days before that she would not let her mind think that way anymore! What was it the book she had read on marriage and sexual love had said…? Allowing this vein of thinking toward one's mate to dwell in the mind will only breed further discontent. It is important especially for the new inexperienced bride to adopt a positive and patient view. Either partner might well detain the event of harmony in the sex act by mentally unloading blame of inadequacy on the other…

Well, inexperienced she'd certainly been and still was, she supposed, if one was to measure by the length of time she'd been at it. Steve had been the first and only man in her young life, the initial and wondrous night going back to four months before their wedding. And what a blissful, bang-up performance that had been on his part right there in the back-seat of his car! God, her climax had been so dynamic that she'd fainted dead away, nearly frightening him to death… poor darling.

Karen smiled to herself now as she remembered, momentarily pausing in her dish rinsing. But such infusing recollections were not doing a damn thing toward soothing the immediate ardor still glowing hotly in her soft belly and simmering young loins, she reasoned, forcefully sealing the memory back inside her mental archives. The main points of importance were that they were totally and rapturously in love with each other, that they were both sound and healthy, and that her twenty-five year husband's position as an insurance agent was secure and progressing beyond their fondest expectations. What young bride of eight months could ask for more than the beautiful new home they were buying in the enviable Oakmont Shadows development? Even their two-year old car was paid for, and in three more months, their furniture, would be entirely their own!