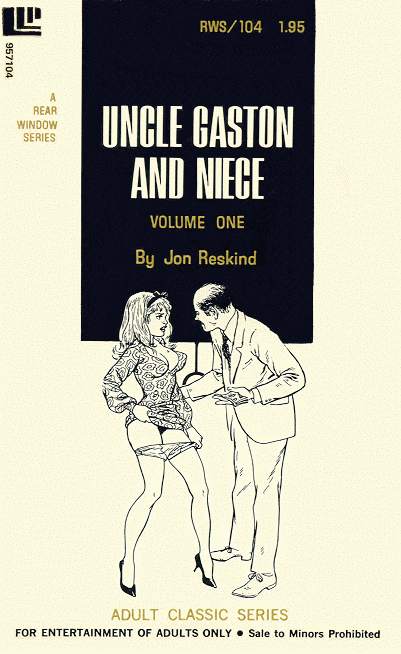 Uncle Gaston and niece Voluma One

Uncle Gaston and niece Voluma One

Gaston Larreau smiled to himself. Guests, noting the expression, anxiously returned it with one of their own, but truly the little man was smiling in his own amusement. It pleased him that celebrities and others of importance vied for invitations to his weekly affairs. It gave him a certain inner sense of superiority. He knew what they thought of him… Canada's czar of the underworld; yet, to be seen at one of Gaston's Larreau's Mont Royale affairs was to be mentioned in the society columns of the Montreal World. He hated them all; they were frauds and parasites; yet, he appreciated them too, for they gave him an air of legitimacy.

Gaston Larreau stood five-feet-seven-inches tall in his exclusively hand designed, one-hundred-and-fifty dollar elevator shoes; he was abundant of girth, broad at the shoulders, balding, and meticulous of dress. His head, like his face, was round and set close to his shoulders, and his small grey, almost colorless, eyes were spaced too-wide apart, just as his too-small ears clung tight to his head. The cicatrix left from an aged razor wound ran the length of his right cheek, ending at the corner of his mouth, making the flesh there puffed and malformed until he smiled, and then the line of strong golden upper teeth became predominant.

Presently, he smiled with her by his side and moved amongst them, always hating yet always appreciating, lashing and cutting with his bitter tongue, but forever enjoying, listening to the whispers, staring down the men and lecherously eyeing their women, while unendingly squeezing her hand. She would be his ultimate moment this evening. He looked forward to it as might a connoisseur saving the finest wine until last. She had no idea what was to come. The expression on her lovely face would be as exciting to him as a moment of actual seduction, he thought. He could wait; to savor in anticipation was often greater than the act itself.

They whispered: She is the niece?

She is Antoine's new wife three months, I think. But of course, he's adopted, you know.

I didn't know. I thought he was actually related.

Hell, no. He's not a Larreau; his name is Poirier. That monster adopted him when he was twelve… conscience, I suppose… inasmuch as he killed the boy's parents. A struggle for power within the syndicate, as I understand it, and the lad's mother happened to be in the car when the bomb went off.

My God! Are you certain, Chapput? That's a dreadful thing to say unless you're certain…

Certain? Who's certain about anything these days, M. Minstre? I'm simply a reporter.

She is devastating, a female voice commented jealously.