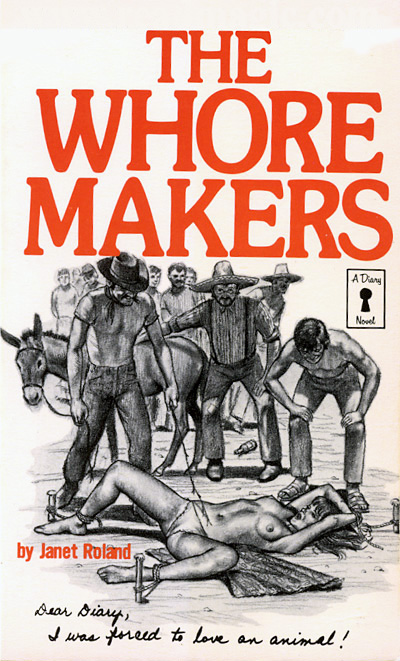 Vivian Long's shapely tits heaved with anticipation as she looked out the window of flight two twenty-seven, bound for Benito Juarez International Airport. She ran her fingers lazily across the smooth sensuous skin of her thigh and found herself thinking about the not-too-distant future when she would be united with her first and only lover, Max North.

The sun reflected off the blue-green water of the Gulf of Mexico and Vivian hoped she looked her best; subconsciously she touched her long blonde hair in the way a woman does when she thinks of her appearance.

The flight from Bogota had been pleasant and without incident, yet Vivian felt a pang of apprehension as the plane approached its destination. It wasn't often that she disobeyed her father, and whenever she did, as she was about to, guilt cast its shadow across her mind.

Come on, Vivian, she thought, you're a big girl now. At eighteen you have to start making some decisions for yourself.

For the last year, the girl had been going to school in Bogota, Colombia, studying anthropology and mastering Spanish. Her father, Senator Joseph Long, had sent her there as a direct result of her love affair with Max. He had said she was too young to understand life and that the strictness of a traditional education in South America would do her a world of good. After several violent arguments, she was forced to give in; her father had a way of getting what he wanted. The two young lovers had been separated by thousands of miles, but managed to keep the fire alive with long, passionate letters and small gifts on special occasions. They had weathered the storm of time, and would shortly be united again, in Old Juarez.

Father will never know I left Bogota a few days early so I could see Max, Vivian assured herself. She was in love and wanted to be with the man to whom she had given her cherry.

Looking at the reflecting light from the gulf made Vivian's eyes tired. She sat back in the luxury of her first-class accommodations and reminisced about her lover.

Max was a strong and handsome young man, a bronco rider by profession. They had met in El Paso during Rodeo Week, a time of excitement and adventure for all the young people of the community. She had sat in the stands and watched in awe as the riders performed their stunts of daring to the roar of the crowd. She had been thrilled, like everyone else, by the startling exploits of the National Bronco Champion, Max North, as he was victorious in one event after another. He was a superb specimen of manhood and the favorite of every woman in the stands. Vivian was in love with him even before they met.

During the entire week the city of El Paso was alive with festivity. But the last night of the week was the best; all the events were over, and the riders mingled freely in the bars and dancehalls. It was on this night that the two young lovers met, at the victory party thrown by the mayor for all the contestants in the rodeo.

Vivian had been standing with her cousin Alice when Max approached them. She remembered how shy he seemed off a horse and how at a loss for words he was when Alice introduced them. She knew him from the year before. The conversation was carried on mostly by the girls, with Max just standing and nodding his head in response to their questions, or answering with an occasional "yup". He was the real solemn type, and Vivian fell in love instantly. She found it difficult to restrain her emotions when he asked them if they would like to join him at the table of honor. After that, she followed him around for the rest of the night like a puppy.