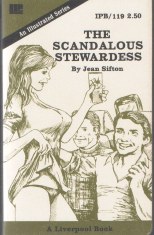 The Bahamian island of Eleuthera is a saber-shaped spit of glistening white coral sand in the crystalline waters of the Caribbean sea. One can get there by boat or by plane. It was on such a shuttle flight from Nassau that Davie Knight sat and breathlessly looked out of the narrow window on December 20th. The sixteen year old kept knotting a silk scarf between her hands, a gesture which could not escape the watchful notice of the striking older blonde woman who sat next to her. The twin-engine plane was small and claustrophobic. There was nothing but a sparkling expanse of transparent blue sea below them. Perhaps she's frightened, the woman was thinking to herself as she surveyed the luscious fresh-faced teen, whose long, glossy sable brown hair hung past her pert up-thrust young breasts that were demurely hidden behind a navy blue cardigan sweater. An emblem sewn to tile sweater pocket identified the girl as a student at one of the chic New York City parochial schools for rich girls.

The young girl's large hazel eyes had an apprehensive look, and from time to time, she would bite her full, sensuous lower lip. Color flushed the girl's smooth cheeks, though she wore no makeup. Nor did she need any. Hers were the vital and strikingly delineated features of the natural beauty.

By contrast, the older blonde woman next to her had artfully used the best cosmetics to embellish her sophisticated good looks. Subtle blue eye shadow and contrasting deep blue liner, plus a generous application of rich black mascara added depth and intensity to her bright blue eyes. Blusher and bronzes augmented an unexplainable sun tan in the middle of winter, a sun tan which was apparent on the woman's smooth thighs and arms when she removed her lightweight jacket. A clinging beige knit mini-dress did little to hide her ample braless breasts, whose firm nipples showed pointedly under the fabric.

The blonde studied the preoccupied teenager for a long moment, looking intently at her face, and then up and down the length of her body, almost the way a man would. Her eyes narrowed, and she involuntarily flicked her tongue out to lick her coral lips salaciously. Then the moment passed, and her expression became one of friendly concern as she gently tugged at the teenager's sleeve and said, "Excuse me."

She waited until the startled girl turned to her. She's nervous as hell, the blonde thought. With a warm and reassuring smile, the woman asked, "I didn't mean to startle you, but I was wondering if I could answer any questions or just be of help. I've flown this hop so many times."

Davie's eyes widened. She seemed reassured. "You have?" she asked breathlessly.

"Oh yes. I'm a stewie. But this time I'm deadheading. This is my vacation. Are you on a school holiday… all by yourself?" she probed.

"Well, sort of. My father is meeting me though I'll be staying with him."

The blonde concealed her momentary disappointment. "Oh, how nice. Does he have a house on Eleuthera?"

"Actually, it's a resort. French Leave."