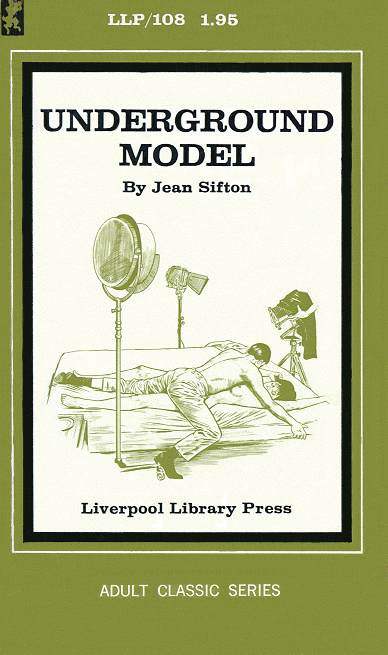 A cool breeze cut shyly through the hot midmorning overcast of Los Angeles smog and gently bristled through the bamboo curtain shading the half-open window of the shabby beach cottage. The girl sprawled lazily on her stomach over the bedcovers absently sipping away at a mug of lukewarm coffee and puffing at the short butt of the filtered cigarette.

She stared through the bamboo slits with mild disinterest, observing the passing scene of summer people, brightly clad in scant bikinis and straw bonnets, making their way to the sandy beach area, a few blocks down the street. Already the hot sun had warmed the asphalt to such a degree that they delicately quickened their steps against the tickling heat and rapidly made their way down to the soft sand in brisk paces.

She reached over to the bedstand and placed the half-empty mug on the scarred wood, not bothering to place a protective covering under it, then turned over on her back and propped her hands beneath her head. Stretching her firm youthful legs to their fullest length, she glanced down at her softly tanned body, now bursting forth from the flimsy silken material of her robe. The creamy spheres of her upraised breasts contrasted in stark whiteness against the tanned flesh surrounding them, accentuating their full voluptuousness with seductive appeal. She ran her long tapered fingers over the curve of her small waist and onto the full expanse of her generously full thighs, pleased with the beauty of her body, and at the same time frustrated that she had not yet been able to acquire a modeling job to prove her talent.

Not wanting the familiar depression to take hold of her, she got up quickly from the bed and made her way into the small bathroom, turning on the cold water to its fullest pressure and splashing it freely over her hot face and throat. She loaded her toothbrush with a mint-flavored paste and brushed vigorously at the small, even white teeth beneath her bud-shaped lips, trying to get rid of the bitter aftertaste the coffee had left in her mouth. Just over the sink, a paneled mirror reflected the tired look in her eyes and the expression of sheer misery on her face. She had never felt so frustrated before in her life. When she had made the final decision to leave home, and the restrictions her parents had placed on her, she had been sure that her youthful beauty would guarantee her swift success in the modeling world of Hollywood. If it had not been for her savings, now almost gone, and her roommate Jennifer's generosity, she would have been forced to return home months ago.

Patricia wrinkled her nose and dabbed her mouth with Kleenex, thinking that she was indeed lucky to have met Jennifer when she did and that there was still time to break into the modeling scene if she applied a concentrated effort with the more popular agencies in downtown Hollywood.

How right her friends had been when they had cautioned her about beauty being a commodity that Hollywood maintained a cold indifference to, it being there in such abundance that she was able to walk down the street at Hollywood and Vine, scarcely attracting a second glance from the passersby. She leaned against the sink and, making a determined effort to get dressed, went back to the bedroom and gathered together the ensemble of clothing and portfolio of pictures that she would need for the day of canvassing the local agencies.

Her thoughts traveled back to the time when she had first met Jennifer. Funny, she thought, she had met Jennifer many times before, reading magazine stories about hippies, in the movies, and in novels. But until a few weeks ago, she had never come face to face with a swinging hipster – a casual, completely free girl who lived only for today. A girl who smoked marijuana, slept with whom she liked, gave herself without guilt, completely sexually free from inhibitions.

The refreshing change from her own dull life into Jennifer's world had been just the tonic she had been looking for. Everything had been exciting and stimulating, exactly as she had imagined it would be. The intellectual discussions on every subject under the sun – ranging from psychology to sex and art which went on until dawn with the all-pervading air of freedom, to say or do whatever you wanted to without criticism or admonishments.

All of this was such a contrast to her life back home on the San Francisco peninsula, where everything seemed mild and boring by comparison. And her parents, though she realized they loved her deeply, always maintained strict limitations on her life and could not seem to understand that, for her own happiness, she would have to make her own way without their help.

All through high school, she had dreamed of her day of freedom, never considering going to college for she found textbooks uninteresting and dry. Of course, the football games and proms were a lot of fun, but still the years dragged by in unendurable slowness. After a lot of coaxing, her parents finally allowed her to attend modeling school where she had learned the basic application of makeup and posing, which was so critical for a successful modeling career. When she had completed the course, last fall, she took her savings and went straight to Los Angeles, where the cost of living was a lot lower, the salaries higher, and most important of all, her opportunities for a modeling career, much greater.