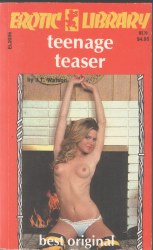 Marilyn Wiley gave herself a last searching glance in the mirror and for the third time adjusted her swimsuit strap so that her breasts would be more prominent. She knew her breasts were the best part about her. Although she was pretty she did not have the beautiful looks that some of the other girls had. Her body was the best thing about her.

She gave her swimsuit one last tug before she hurried out of the locker room. There were two boys standing near the doorway. She recognized them as being boys in her math class. Timmy Douglas and Brian somebody. She heard Timmy whisper, "Boy, does she have an ass on her."

She tried to ignore their vulgar comments but she couldn't help a little flush of excitement. It happened every time a boy said something nice about her. It didn't matter what he said, as long as it was a compliment.

She was very insecure about her looks.

Her mother had caused most of her insecurity. Her mother was one of those plain women who were jealous of any other woman even if it was her own daughter.

"You're too short," her mother often said. "And you're too big up top. Boys will think that you're ugly."

It took her a long time to realize that boys didn't think her large breasts ugly. In fact, most boys liked them too much. Most boys didn't even mind her being short; it made them feel taller and bigger. Still, she didn't have the good looks that Carol or Leslie had. She was pretty, but not beautiful.