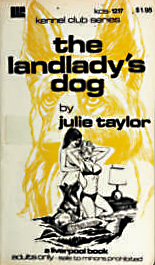 The big German shepherd panted as if grinning up at the tall, curvaceous girl with the long, ash-blonde hair, and whimpered in excitement when she reached down and petted his great head. She smiled, revealing a perfect set of even white teeth, oohed a pet phrase at him, then directed her attention to the attractive brunette standing in the apartment doorway.

"Has he been a good dog today, Peggy?" Carol Dorsett questioned the older girt with the dark brown eyes who wore her hair in a brief and flattering bouffant, giving her a kind of mysterious thirtyish look.

"Sultan's always a good dog, aren't you, baby," the shapely wife of the building manager complimented, adding her own caressing hand to the powerful animal's muscular flanks. "How did it go today, Carol? Any luck?"

"Nothing," the young green-eyed divorcee sighed. "I must've filled out a dozen applications, and just about walked my legs off. God, I never realized it was going to be so difficult finding a job or I wouldn't have left San Francisco. At least, I know my way around there… but this Hollywood… brother!"

"Mustn't get discouraged, honey. Something will turn up," Peggy White assured her.

"I hope it's soon," Carol said, trying not to show her acute dejection. "Six straight days of listening to 'sorry's' doesn't do much for a girl's morale. Anyway, thanks again for looking after Sultan for me, Peg. D-Do you suppose that Monday…?"

"Of course, hon. Just drop him off with me when you leave," the other replied through her attractive smile.

The ash-blonde beauty nodded her appreciation, wondering in what little way she could manage to repay the super's wife. Money was so tight for her… "Well, come on, darling," she addressed Sultan. "Carol's got to bathe some of the ache out of her tired bones. Thanks again, Peg."

"Anytime, honey," Peggy White replied, slowly closing her door as Carol and her grinning, tail-wagging dog moved along to the next one where the weary divorcee paused to fumble in her purse for the key.

Inside, Carol immediately kicked off her low-heeled shoes. Leaning back against the wall, she took turns massaging the toes and instep of first one aching foot, and then the other, while Sultan watched with interest. "Oh, baby, you don't know how heavenly that feels," she breathed down at her loving and constant companion. "If only you could, I know you'd do it for me, wouldn't you, darling?"