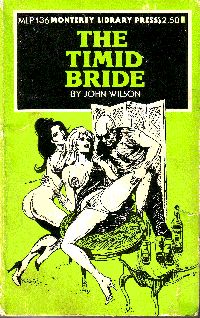 "What is it? What is it?" cried Cindy Hanger excitedly as her husband climbed into his car in the driveway.

"It's a surprise," he said. "Not to be opened until I turn the corner. It has to do with what we spoke about last night…" And with that, shut the door to his car.

"I can't wait," she cried, shaking the brown parcel from side to side. "What's in it?"

The car pulled back and out of the driveway. Cindy waved from the front porch as she watched the red tail lamps disappear up the street in the early morning fog that enveloped Dover City that damp February Tuesday. "Goodbye, darling," she cried after her- new husband.

"Goodbye… goodbye… goodbye…" she murmured on her way off the porch and back inside the small but cozy two-storey house into which she and her new husband had moved the month before. Why be so dramatic? After all, he's going to be back this afternoon… He's only going to work… She stopped in front of the hallway mirror and shook the shoe-box sized package which she held in both hands. Then she glanced at herself instead of the package.

The silky blue house coat suited her well, giving her pink-white baby skin a radiant glow. She had a porcelain complexion, and even without the benefit of morning makeup, her cheeks were a rosy hue of crimson on a background of snow white. Her thick, mauve lips outlined a large, pretty clown red mouth, and her long, slender jaw line, rising upwards on her proud, big-eyed face, was undeniably sexy. She gave herself a saucy enough smile, and then her eyes caressed tenderly downwards in the silver glass, accepting the voluptuous shape that hid there in front of her under the simple blue housecoat.

"My! Oh my! I certainly am the vain one this morning!" she told herself with a sharp smile full of bright white teeth. She shook a finger at herself, saying softly, "Tetch, tetch…"

Cindy Hanger pulled away from the mirror the way a piece of metal comes undone from a magnet, quickly and with a kind of attraction still holding her to it, as if she were breaking free of some indomitable force. In the living room, she sank into the overstuffed downy soft sofa on the arm of which still rested her morning coffee.

"Now," she said aloud, taking a sip of the tepid light brown mixture of cream, coffee, and sugar, "let's see what we shall see!"