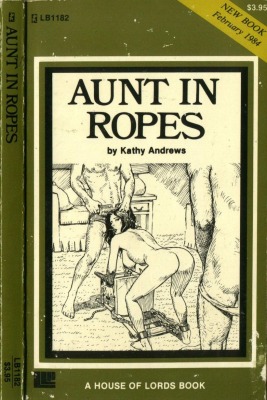 Peggy Burke's body shuddered, her eyes downcast with shame. Her blouse had been torn open, buttons scattered about the floor, her up tilted tits fully exposed to her nephews.

Her hands were tied behind her back, with another rope holding them against her ass by being looped about her narrow waist, then brawn up between her legs. The rope lifted her skirt upward, cutting along her cunt and up again. Her ankles were hobbled, with just enough room to allow her to walk with very short, stumbling steps.

She was aware of their cocks, straining against the thin fabric of their Jockey shorts. She tried to keep from looking at the bulges, but her gaze strayed time and again to the front of each boy.

They had caught her as she came from the bathroom, freshly showered and dressed, and before she could escape, had tied her up this way. They had started to gag her, but decided she couldn’t scream loud enough for anyone to hear.

She stood in the very center of the living room, half exposed, feeling very much ashamed of herself. She had cried at first as they tied her. Now the tears were dry, and she stood helpless before them. As she peeked at the front of their Jockey shorts again, she realized that their cocks had become harder, molded to perfection by the tightness of the white shorts. Each now had a moist spot where the head of each cock pressed into the cloth.

She shook her head almost violently.