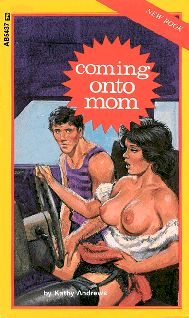 Joan sat in the waiting room with her son, Billy. It was time for his annual checkup. There was nothing wrong with her son that she could see, except he was growing like a weed.

They were the only ones in the waiting room now, and Billy was getting restless. After the last patient had left, the secretary relaxed. She sat behind her desk filing her fingernails, apparently finished with her work for the day. The desk was open in front, and Joan found herself looking at the girl's knees.

It brought back an old memory of when she was a kid. A cousin had spent the night with her, and as girls will, they had begun touching each other, exploring and experimenting.

The girl behind the desk began to squirm her ass on the chair, opening her knees a bit. She didn't give any indication of awareness, Joan thought. She could see between the girl's thighs now almost to her crotch the girl kept filing her nails, and her knees kept opening slowly. Joan felt excitement bubbling between her own thighs. She was wearing jeans, and her legs were crossed. She felt the wetness starting in her own cunt, and began flexing her thighs, creating pressure on her cunt.

She became aware that her son was no longer squirming about restlessly, and glanced at him. Billy's eyes were big, and he, too, was seeing between the girl's legs. For a moment Joan blushed. She had saw the lifting of his cock inside his pants. Turning her eyes back toward the girl, she felt her breath catch in her throat. She could see the girl's panties now, the expanse of her crotch. The girl had opened her legs wide, scooting her ass to the edge of her chair, still filing away at her nails.

She glanced at her son again, feeling as if she should nudge him, make him stop staring so openly. Yet, she didn't. There was a perverse sensation of pleasure in knowing her son was looking up the girl's dress. She felt her cunt bubbling wetly, and the urge to swing her foot back and forth, bring her cunt to orgasm, was getting strong.

She glanced at her son's lap again, and his cock was now bulging out with an intense hard-on. She had never seen his cock this way before, and she felt a shiver rippling up and down her spine. Her feelings were confused about it. In a way it thrilled her, and in another she felt ashamed. Not ashamed because he had a hard-on, but ashamed because it excited her.