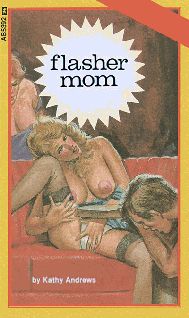 Karen Morgan knew the man was looking at her, his eyes bright as he peered between her knees and under her skirt.

When she first realized what the man could see, a flush came over her face, but then she felt warm and good. Not that the man could really see anything – she wore nylons attached to a garter belt and then there were her panties, so he couldn't see anything, not really.

She sat in the molded plastic chair of the air terminal, waiting for her son to arrive. She had gotten there early, eager to see him after his two-month absence. She always hated it when summer came and Tommy had to visit with his father. She didn't really mind that Tommy stayed with his father, but she detested the woman who brazenly called herself Tommy's new mother. There was no other woman who could be his mother, Karen told herself, and that woman her ex-husband had married had better watch herself.

Glancing at the huge clock, she saw it would be another half-hour before Tommy's plane arrival. As eager as she was to see her son again, Karen enjoyed the wait. She had never minded crowds, being around people. In a way, she enjoyed it. She enjoyed watching the different faces, the way people talked and moved. She was – Karen admitted with a twinkle in her eye – somewhat of a voyeur. She liked to see what women wore in public, their hair styles, their makeup. She liked looking at men, the different sizes and shapes, and tried to determine if they were aggressive or timid, what businesses they were in.

She was a people watcher.

And people watched her. Karen was aware of her cover-girl looks, her tall and slender body, her rich, long auburn hair and green eyes. She was a beautiful woman, having a rare beauty seldom seen outside the pages of magazines. She had been compared to many of the recent sex symbols of the film world, something she hated. She did not resemble anyone but herself, she thought.

Karen had, in the past, refused to become a face on a magazine or a centerfold that men – and giggling young boys – could fantasize over as they jerked off. Not that she had anything against them jerking off. She also didn't find anything wrong with the girls who posed in the glossy magazines with their flawless tits exposed, their slender thighs parted to reveal the pink wetness of a hair-lined cunt. On the contrary, she sort of enjoyed looking at the lovely girls herself.

Karen was still receiving offers to pose in fashion magazines and men's magazines. She had, in her late teens, been a fashion model for one of the larger clothing stores, modeling mostly lingerie. She had been displayed in many mail order catalogues, wearing tight bikini panties or nylons or seductive garments.

But that was years ago and she had no intention of returning to that work.