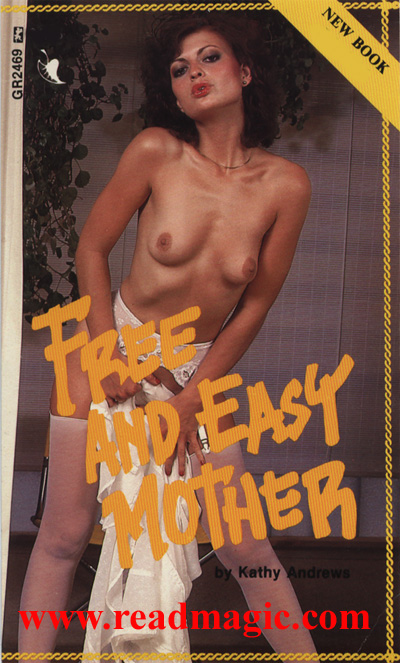 Sitting in her new, short skirt, Kathy knew when she crossed her knees that Kenny could see up the creamy expanse of her thigh. That was the idea, to get his attention.

She felt all shivery and wicked doing it, and Kathy loved to shiver in wickedness. It was almost like having an orgasm, but not quite. The short skirt was tan in color, matching her light brown blouse. The blouse was half a size too small, and her firm, widely spaced tits strained

against the stretching nylon. Her nipples were beautifully defined, puckered and hard. Although she was not wearing nylons or panty hose, her legs were well tanned. On her feet, she wore knee-high, heeled boots made of soft leather.

Kathy's rich brown hair shimmered in the sun light, falling in silky waves to her shoulders. She looked out over the green park with hot blue eyes, a suggestive, but small, smile on her full, moist lips. Rocking her foot, she could feel the pressure of her inner thighs against her cunt. The rocking motion felt good, kept her in a constant state of moist arousal. But then, Kathy was always in a moist state of arousal.

She loved to feel the moist heat between her thighs, loved to show her long legs off, loved to wear tight-fitting skirts, dresses, jeans almost anything that revealed her tall, curvy body to perfection. She loved to be looked at, especially with desire. She loved to see the effect her body had on men. She was very pleased if she could create a hard-on that bulged from their pants. A man looking at her with a hard, on was the evidence Kathy needed to know she was beautiful, desirable, needed. She needed to be desired, needed. It made her happy when she was needed.

But despite her eagerness to show off, flash

her silky thighs, Kathy was not a cock-teaser. But on the other hand, she wouldn't fuck just any guy that came on to her. She had always been particular, and maybe that was the problem. Maybe she was too particular, she told herself. Maybe that was why she wasn't getting fucked as often as she wanted. She wanted to get fucked constantly, but not by just anyone with a hard-on.

The lucky guy that managed to fuck Kathy found himself with a woman of his dreams. Once she fucked a guy, she was his, loyal and faithful. She would do anything for him, anything at all. Whatever pleased him, turned him on, she was his eager, uninhibited partner. But Kathy had been hurt by most of those guys. She had been hurt by her husband, who couldn't accept her eager, intense, erotic hungers, never believing a girl with such appetites could possibly be faithful. After he had left in a paranoid condition, Kathy had been devastated. She began taking on anyone who showed kindness to her, but as usual, it never lasted. They all had been like her ex-husband: jealous, paranoid, not believing she could be such a hot piece of ass and still true to them.

That was the reason for Kenny.