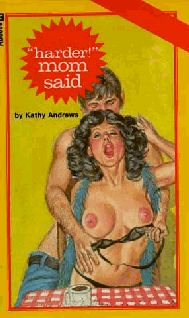 Sabrina tossed the sheets from her sweating body.

The lighted digital clock on her bedside table indicated three in the morning.

She was perspiring heavily, and the images of her dream still swirled around in her mind.

With a moan she flung her arm over her eyes in an attempt to blot the scenes away. But they remained, as she knew they would. Nothing would make them go away, nothing.

The dreams had started two weeks ago and came to her every night without fail.

This one had been particularly bad for her.

She had been driven in her car to a desolate spot outside of town. There she was taken before a group of boys and girls sitting around a huge campfire. She had not known any of the boys and girls, they were all complete strangers to her. The only person she had known was the one who had driven her – her son.

As dreams often are, there were no explanations of how she had gotten into the car, whether willingly or not. So much was missing from the dream, she had so many questions. Why her son had driven her to this strange gathering was another mystery to her. Why he was even involved made no sense to her.

After arriving at the bonfire, her son had taken her arm and pulled her near the fire, standing her in front of the boys and girls. Although there was conversation, Sabrina could not make out words or else she did not remember them. That part came later in the dream.