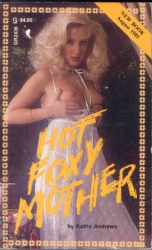 Brenda spread her legs wide, puffing the crotch of her panties away from her pussy. She had bunched her dress around her waist, and lay back on her bed, her head on the pillow.

At the foot of the bed she watched her reflection in the mirror. It was not a large mirror, but she could watch herself well enough. She could see the soft curls of her pussy, the wet pinkness of her cuntlips, and her knotted clit, even the curvy cheeks of her shapely ass. She loved to watch herself when she used this thing, despite her preference for a hot, hard cock instead. There were plenty of cocks she could have if she wanted them. The problem was, Brenda didn't want them, and she wanted younger cocks. For some strange reason, she was only really interested in fucking young men.

Brenda had nothing to be embarrassed about. She was tall and beautiful, rich chestnut hair and green eyes. Her body was slender, but her tits were shapely and pointed. She had a small waist with rounded hips and graceful, slim thighs. Her ass smelled out sweetly and made the mouth water. And her cunt… her cunt was juicy and hot and ever so ready to fuck. The dark curls fanned out toward her hips, thick and lush, curling along her swollen pussy lips and licking neatly toward her asshole.

She had men, if she wanted them, plenty of them. But she wanted… Joey!