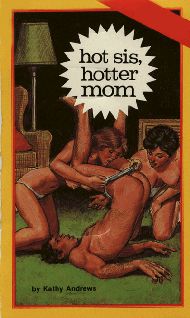 Joann Wilkins felt there was something going on between her son and daughter.

She didn't know for certain, but her feeling was very strong.

She saw her suspicions confirmed in their looks, their reactions to each other, the sly glances, the twinkles in their young eyes. A brother and sister simply did not, overnight, stop arguing and fighting, and begin getting along with each other like two young lovers, Joann knew.

The change had came over them shortly after her divorce, she realized. Perhaps it was because their father was no longer with them, their method of rebelling against the divorce. But somehow Joann didn't think so. Their, father had been a harsh man, difficult to please. He was fierce in his punishment of them. Maybe it was a reaction to being without fear of the man.

Dave was just learning to drive the pickup his mother had gotten as part of the settlement. Joann was pleased for her son Dave was crazy about cars and, in particular, the pickup.

Judy had been sprouting swiftly, her small tits taking on a beautiful shape, and her hips were swelling. She had lost the skinniness in her thighs, and they were becoming long and shapely. Her little ass was a taunting delight to see.

Judy ran around in tight shorts so tight that half her fine little ass showed. Joann wouldn't have had the nerve to wear something like that when she was a girl; she didn't have the nerve to wear anything like that now. Joann was embarrassed to wear anything that drew attention to her body. She dressed well, but all her clothing was designed to conceal her lush curves, her round and firm tits, the attractive swell, of her ass, her slender thighs and small waist.

Joann had always been shy around people. She wasn't withdrawn, but cautious. She was cautious because she was afraid of what they might see. Joann feared they would see something she had hidden deep inside herself for many years.