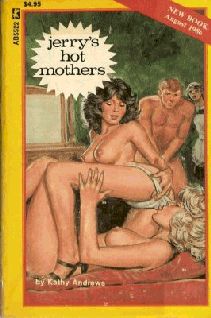 Every time Susan came to pick up Jerry for his weekend visit, Marcy still couldn't believe how young she looked.

"Are you certain you're twenty-one, Susan?" Marcy asked as she looked at the slender blonde woman.

Susan nodded, smiling. "I know, I look sixteen," Susan said. "Everyone tells me that. But really, I'm twenty-one."

If Marcy didn't know better, she would think Susan was lying. Not only was her face that fresh-scrubbed, unblemished golden color of a sixteen-year-old girl, but her body seemed that way, too.

Every time she was near Susan, Marcy felt old. Old at thirty, she thought with a frown. Susan was her ex-husband's new wife, and Marcy felt somewhat jealous. Not that he had remarried, but because of Susan's youthful looks. And Susan was usually dressed the part of a sixteen-year-old. Today she wore very tight shorts, stark white, with a pale pink blouse. It was obvious Susan was naked under her blouse those two rigid nipples bored against the thin material as if they were fully exposed.

Susan had a beautiful body, and was not the least bit ashamed of it. Her hair, the color of rich honey, shined in waving glory below her shoulders, and she had huge, sparkling blue eyes, a wide, full mouth, and a delicious habit of crinkling her nose when she laughed, which was often. Her skin looked silky smooth with the golden tan. Her waist was quite small, and her hips rounded out in a way that Marcy knew made men drool. The tight shorts Susan had on seemed to be made for her rounded, swelling, exquisitely tight ass. And those legs, so long and perfectly shaped.

Marcy lowered her dyes and saw the slight bulge of Susan's cunt against the tight crotch. She looked for a panty line, but there was none, making her believe Susan was naked under her shorts, too.

Although Marcy was just as beautiful, just as slender, just as rounded and unblemished as Susan, she was hardly aware of it. In fact, Marcy was seldom aware of her body or her face. She had never been concerned with them they were presentable, and that was all she cared about. Her hair was a rich, dark brown, but like Susan, her eyes were blue. She, too, had a wide, full mouth and a straight nose. Her own tits were slightly fuller, bigger, but not by much. Whereas Susan's tits seemed pointed, Marcy's were rounded, but they were just as firm. Her own hips and legs would not take a back seat to Susan, either. Nor would her ass. But Marcy was unaware of this.

"I can well see why Brad married you," Marcy said without envy. "He always did seem to like his women younger than me."