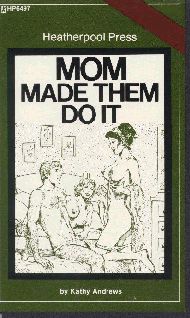 Mom made them do it

Mom made them do it

Susan Meyers was having trouble with the light.

She sat on the tall stool, one heel hooked in the highest rung, the other leg out with her foot flat on the floor. She looked at the canvas before her and frowned. It wasn't the way she wanted it.

On the foot-high platform near the huge window were her models, Tommy and Julie. They were wearing the Roman-like togas she had made specifically for this painting. She looked at her children with the frown still on her face. Tommy was kneeling before his sister on one knee the other knee was up with his hand resting on it. He was facing his sister who sat on a chair a foot higher than the platform.

From the angle of her son's position, she could see his toga skirt was up and she was positive that it was his cock that she was looking at. And if it was his cock, then her son wasn't wearing shorts. His cock was not just dangling there; it was hard. The head of Tommy's prick was holding the hem of the toga up. Susan glanced at her, daughter, wondering if Julie was aware of her brother's hard on. But the girl's face did not show anything. She sat there with a sweet innocent expression, and didn't appear to be breathing at all.

Susan followed her son's eyes, and this time she did gasp.

From the positions of her daughter and son, Susan realized that Tommy was gazing underneath Julie's short toga. It was now for the first time that Susan realized she had made those costumes far too short

To confirm her suspicions Susan got off the high stool and moved toward her children. She stood next to her son and looked at her daughter trying to make her expression thoughtful and critical. She found that with her head close to Tommy's she could look up Julie's toga and see her daughter's cunt. So that explained her son's hard on, she thought, as she went back to the canvas.

Susan wasn't horrified; she felt a strange, pleasant sensation, mostly between her own long, slim, creamy thighs. She smiled to herself as she dabbed paint on the canvas, not interested now in contrast or color. She looked at the way her son's cock held his toga up, and now she could see that it was dripping from his piss hole.

There was a sudden contraction of her cunt, and Susan moaned softly. She felt an excitement bubbling within her body that she had not felt in a long time. There was a flush on her flesh, and her tits swelled. Her nipples became rubber hard. She felt the throbbing pleasure of her cut as she gazed at Tommy's cock. Susan began to wonder what his cock would feel like in her hand, rubbing along her thighs… thrusting into her cunt.

"Take a break, kids," she said, her voice unusually thick and low. "We'll get back to this in a few minutes."