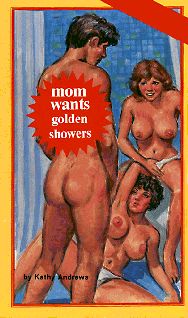 After years of living alone, she now had the twins with her. She wasn't accustomed to the noise they made, the sudden burst of giggles from Shari, or the teasing laughter of her brother, Barry. She wasn't used to the racing and wrestling in the house. She wasn't used to reminding them to take their baths at night, or checking their clothing, or doing so much laundry, or preparing so much food.

Most of all, Janet wasn't accustomed to the lack of modesty her twins showed. She had been shocked to find they thought nothing of using the bathroom, either bathing or taking a piss, with the door left wide open. She was shocked at the words they sometimes used, words like shit, cocksucker, motherfucker.

Janet couldn't deal with it.

She couldn't even talk to her twins about their behavior.

She was too embarrassed.

All her life, Janet had been passive, obliging those stronger than herself. She wasn't meek, but she was simply a woman that took joy in pleasing others. She was quiet, often times exhibiting a shyness that was somewhat deceptive. Her shyness was an attractive aspect of her personality, but beneath it was a smoldering passion.

Yet, Janet's passion was a problem, too.