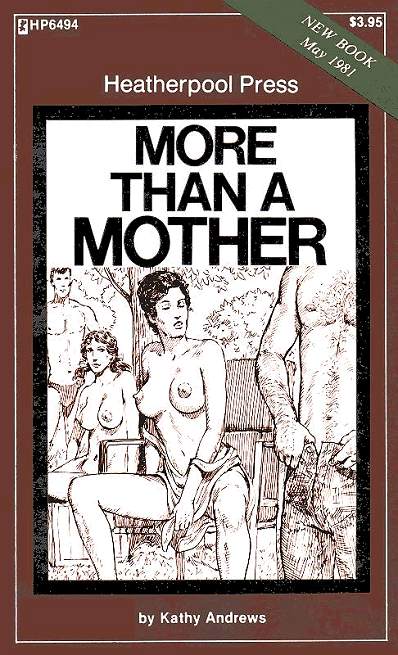 More than a mother

More than a mother

"Take your panties off!"

Shari stared at the boy, not believing what he had said. But he stood there, his hands on his hips belligerently, glaring at her. Next to him stood his brother, who looked just as aggressive. On the other side, standing a foot or so in back of the brothers was a girl, their sister.

"Why are you telling me to do that, David?" Shari asked. She had known the three for many years, had played with them. In fact, they had raced through this same grove of orange trees only the day before, laughing and chasing each other.

"Because we wanna see your cunt, that's why," the other boy, a year younger than David, said.

Shari looked at him. She was hoping to see compassion, perhaps help, on his young face. But all she saw was a burning interest in his eyes. She was starting to tremble as she faced them. Glancing at Sandra, Shari was surprised to see the blonde girl's blue eyes blazing strangely. All the time she had played with them, the many years that they had been friends, she would never have suspected them capable of doing anything like this.

She turned her eyes back to David, the taller of the three. She thought he was funny, trying to cultivate the few hairs on his upper lip to a manly moustache. David was usually more playful with her, but there was nothing playful in his eyes now.

She looked at his brother, Mike. Mike and Shari were the same age, almost to the day. They had entered their teens together. Yet Mike seemed to be the youngest of them all. There would certainly be no help coming from him. He was just as interested in getting her panties off as his older brother was.

Again she looked at Sandra. Sandra was a small girl, a sweet-looking little blonde with twin ponytails. She was the youngest, a year younger than Mike and Shari. The front of Sandra's dress strained over two burgeoning tits, and her hard little nipples poked against the garment. Shari's tits were somewhat bigger, shapely, saucy. Shari had been proud that she had to wear a bra now, and she knew that Sandra was jealous of this.

"Why are you saying that to me," Shari asked again, shivering suddenly.

"We wanna have a look at your pussy," Sandra said, bluntly. "And you better let us see it or…"