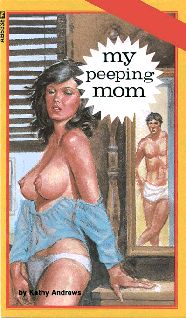 Janice sat on the chair in the darkness of her bedroom.

She knew she couldn't be seen. But she could see.

The house next door had bedrooms facing her own. There was perhaps twenty feet separating them, with a low fence between. At night, there were usually lights in those bedrooms, and she had been seeing some interesting goings on ever since the house was occupied.

Watching from the darkness of her own bedroom, Janice did not deny the excitement it aroused in her.

In the beginning, she had fought against it, thinking it weird and perverse, wicked, lewd. But then after she had suffered horribly, Janice accepted it. Once she accepted the feelings and emotions that rumbled through her body and mind, she had found a measure of peace. She knew of her desires, of the wanton desires in her mind and body, but she kept them to herself… so far.

And now, the things she saw next door were making those desires burn with a searing flame. At first it had been fun and exciting just to peek, but now it was turning into torment.

The light was on across the fence, as usual. But the room was empty. That didn't matter; Janice knew it would be occupied soon. About ten feet from that window was another, and it, too, was usually well lit. Either those next door felt secure, or they didn't care if someone saw them. Either way, Janice wasn't going to inform them that they could, be seen. She didn't want to put a stop to what was quickly becoming a nightly pleasure.

The things that happened next door did not always happen at the same time. Most of the time only one room was worth watching.